Home / WORLD / Biden ‘will be removed one way or another’: Alex Jones, Michael Flynn speak at pro-Trump march as rival protesters clash (VIDEOS)

Biden ‘will be removed one way or another’: Alex Jones, Michael Flynn speak at pro-Trump march as rival protesters clash (VIDEOS) 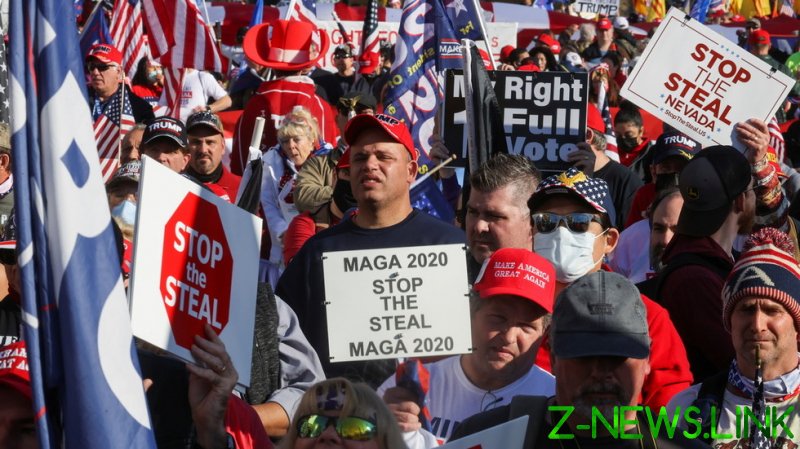 DC police worked to keep counter-protesters from clashing with Trump supporters, including members of the right-wing Proud Boys movement, at Saturday’s demonstrations, with lines of cops blocking off groups from interacting.

Police worked to block off Black Lives Matter plaza where counter-protesters were gathering. This left pro-Trump supporters to simply exchange words with the opposing crowd.

“Wake the f**k up…has BLM helped any of you?” one Trump supporter said to Black Lives Matter protesters through a speakerphone.

Multiple protesters, identified as Proud Boys members by Daily Caller reporter Shelby Talcott, were not happy with police blocking off BLM Plaza, leading to scuffles with several of the officers.

Even with precautions taken, there still managed to be protesters exchanging blows, with officers stepping in to detain multiple people who clashed in a fight caught on camera.

Making their way around police blockades, the crowd chanted, “Whose streets? Our streets!” as they marched. Other chants included “f**k Antifa” and “f**k Joe Biden.”

Protesters gathered outside the Supreme Court earlier on Saturday morning where they sang the National Anthem ahead of hearing conservative speakers like Gen. Michael Flynn, Trump’s former National Security Advisor, address them.

In his talk to the crowd, estimated to be in the thousands, in the afternoon, Flynn promised there are “still avenues” for Trump to win the presidency, despite enough states certifying their votes for Biden to have the electoral votes to cinch his victory, and the president’s legal battles quickly being exhausted.

InfoWars founder Alex Jones also marched with protesters and spoke to them at one point in a fiery speech, where he promised he will “never recognize” Biden as president and said the Democrat will be removed from office “one way or another.”

“The system is publicly stealing this election from the biggest landslide and the biggest political realignment since 1776,” Jones, one of Trump’s earliest and most vocal supporters, said.

Trump himself flew over the crowd in Marine One, earning massive cheers. The president was making his way to the annual Army-Navy football game, where he was also celebrated by the crowd. He had promised earlier in the day he would be “seeing” the gathering of supporters.

Pro-Trump demonstrators also marched in DC on Friday evening, which ended with multiple clashes with counter-protesters. Footage from the gathering showed police needing to step in and break up multiple physical altercations between Trump supporters and liberal demonstrators wearing all black clothes and helmets.

Marching near the Marriott Hotel on Friday, demonstrators sang the ‘Star Spangled Banner.’

Notable Trump supporters like Roger Stone and InfoWars journalist Owen Shroyer arrived in DC on Friday night, as well. Stone spoke to the crowd and blasted the Supreme Court’s decision to shoot down an effort by Texas and several other states to block the results from multiple swing states where the president has alleged voter fraud.

“Nothing is over until we say it is,” he told the crowd, who then chanted, “No Trump. No peace” in response.

Saturday’s protests, which President Trump highlighted on Twitter, were put on by conservative groups like Million MAGA March and Women for America First, who each filed permits anticipating thousands of participants.