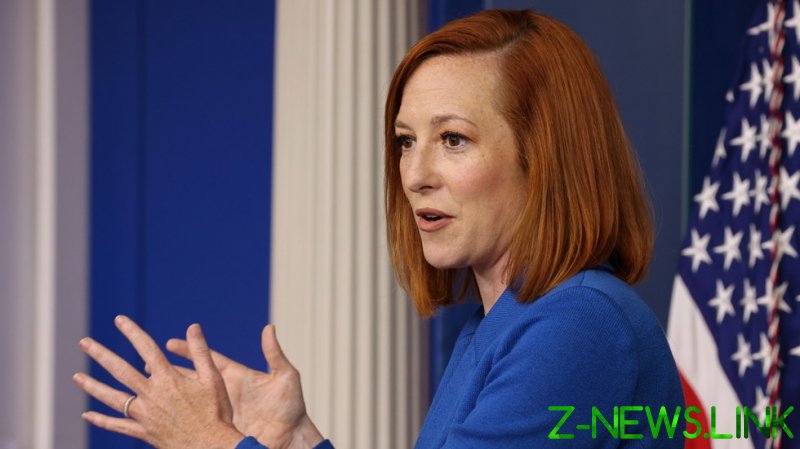 Speaking to reporters at a White House press briefing on Monday, Psaki echoed the words of US Secretary of State Antony Blinken, calling the arrest of journalist Roman Protasevich a “shocking act” and “a brazen affront to international freedom and peace and security by the regime” in Minsk.

A Ryanair flight from Greece to Lithuania made an emergency landing in Minsk on Sunday, due to an allegedly fraudulent report of a bomb on board. Protasevich was then arrested by police. The former editor of the Polish-based Telegram channel NEXTA Live is wanted in Belarus on charges of inciting mass unrest, referring to last year’s protests calling the presidential election stolen and demanding regime change in Minsk.

“We condemn the Lukashenko regime’s ongoing harassment and arbitrary detention of journalists simply for doing their job,” is how Psaki described the arrest on Monday, objecting in particular to Belarus “diverting a flight between two EU member states for the apparent purpose of arresting a journalist.”

Demanding an investigation, Psaki said the US was “in touch with a range of partners bilaterally and through multilateral channels, from NATO, the OSCE, UN, EU and others.”

Asked if she would have expressed similar concern over the 2013 incident in which the plane carrying Bolivian President Evo Morales was forced to land in Austria due to allegations NSA whistleblower Edward Snowden was on board, Psaki brushed off the question.

“We work with our partners all over the world, I can’t tell you anything else,” she said.

As it turns out, there was no need to ask the hypothetical. The White House press secretary was literally the State Department spokeswoman on duty in 2013, and did not express the slightest bit of outrage over the Morales incident, as journalist Glenn Greenwald pointed out.

Asked if the US had any role in encouraging European countries to deny Morales the use of their airspace, Psaki said that US officials “have been in touch with a broad range of countries over the course of the last 10 days.” As for Snowden, she said he had been “charged with three felony accounts and should be returned to the United States. I don’t know that any country doesn’t think that that is what the United States would like to happen.”

France and Spain, Greenwald pointed out, eventually apologized to Bolivia and admitted they denied Morales the use of their airspace due to being told Snowden was on board. Neither named the US as the culprit, but Psaki’s own words leave little room for doubt on that account.

Yet it “would not even occur to Biden officials – just for the sake of appearances if nothing else – to try to find someone to do this other than the same person who, in 2013, obfuscated and defended the actions of the US and EU in doing the same thing to Bolivia’s presidential plane,” Greenwald wrote.

Snowden ended up stranded in Russia due to the US canceling his passport, and was later given asylum by Moscow. Morales was eventually ousted as the president of Bolivia in November 2019, when the US-backed Organization of American States (OAS) cited statistics – later debunked – to claim he was “rigging” the election. While Morales himself was forced into exile in Mexico, in October 2020 his party defeated the US-backed interim government in a landslide.