Home / WORLD / Biden wants an end to US foreign adventures, but the multi-billion dollar death & destruction industry still has him in its grip

Biden wants an end to US foreign adventures, but the multi-billion dollar death & destruction industry still has him in its grip 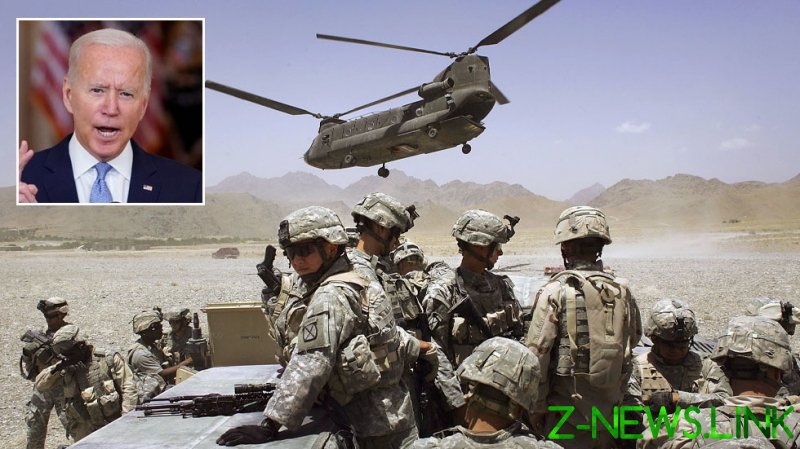 With Kabul falling before even American troops could get out, let alone those Afghans unfortunate enough to have put their lives on the line to support them, Biden sought to defend his unilateral withdrawal. “As we turn the page on the foreign policy that has guided our nation the last two decades, we’ve got to learn from our mistakes,” he said. “This decision about Afghanistan is not just about Afghanistan. It’s about ending an era of major military operations to remake other countries.”

The US, it seems, has sworn off foreign intervention, for the time being. The change, if it holds up, couldn’t be more drastic. America was at the height of its power when it invaded Afghanistan in 2001, but now, 20 years later, the age of global hegemony has evidently come to an end.

The rational response on that side of the Atlantic would be to change – to realign and readjust foreign policy priorities to match the problems it is facing in the world, maximising its security. But structural incentives – and vested interests – are firmly in favor of keeping on as normal and doing the same, meaning Washington may end up not acting in its own interests.

Is Biden a rational actor?

When the US ramped up its pursuit of foreign wars in 2001, putting ideology ahead of security, it was an era-defining ‘unipolar moment,’ or the achievement of ‘global hegemony,’ defined by unassailable American supremacy. However, it was destined to be temporary as the the country depleted its resources by gradually transferring wealth from the national core to the periphery of its empire, while the perceived need to marginalise rising powers such as Russia, China and Iran would result in these countries finding a common cause in pushing back against American ambitions.

Now, facing new realities and a weakened war-chest back home, realist foreign policy thinkers have to continue two possible paths. The first, continuing to pursue hegemony and domination, ignores the reality of relative decline. American debt is spiraling out of control, the dollar is coming under pressure, socio-economic dismay is driving political polarisation and the country’s allies are losing faith in its security guarantees. All the while, Washington’s rivals are building an anti-hegemony movement designed to give them a place in a multi-polar world.

The second option is to adjust to the new international distribution of power by pulling back on the military posturing to restore fiscal discipline, returning NATO to the status of a status-quo organisation that does not expand or go ‘out-of-area’, and to negotiate a multipolar system with Eurasian powers such as Russia and China where the US can ideally assert the role as the ‘first among equals’.

But while, on paper, the second seems the smarter choice, it’s likely the US will continue down its current path.

Institutions are commonly said to be ‘sticky’ in terms of persevering long after their usefulness has expired. American institutions are structured for hegemony and the defence industry does not merely pack up its things when a war is over.

Defence firms finance the think tanks and research centres that provide their ‘expertise’ through the media and consulting policymakers. The top 50 think tanks in the US receive more than $1 billion from the US government and defence contractors, annually. Just think about that – it’s equivalent to the entire yearly military budget of a rich medium-sized country like Ireland.

The second and third place of top-funded think tanks, which overwhelm any influence from objective academics, include the Centre for a New American Century (CNAS) and NATO lobby group The Atlantic Council. Investigations by The New York Times have made it clear that think tanks have developed a business model of selling political influence.

Even digital media platforms such as Facebook have established a partnership with think tanks like The Atlantic Council to ‘protect democracy,’ most likely under government pressure. Or at least due to ‘encouragement’ from figures close to the centre of power.

Indeed, liberal democracy has been promoted as a hegemonic norm for such a long time that an entire industry of ‘nongovernmental organisations’ such as Freedom House and the National Endowment for Democracy has emerged, which link ‘democracy promotion’ to NATO expansion in the post-Soviet space.

The consequence of the incentive structures is evident as media personalities have risen in the system rather than being held accountable for repeating establishment talking points about Iraqi weapons of mass destruction, Trump’s collusion with Russia, Hunter Biden’s laptop being a Russian conspiracy, Russian bounties on US troops in Afghanistan and other debunked falsehoods.

The problems in Washington were exemplified earlier this year, when Russia expert Matthew Rojansky was successfully blocked from taking the post of Russia director on the National Security Council.

Rojansky’s position is that the US must scale back its foreign military activities that drain resources at a time when the US struggles with domestic challenges. He feels this waste incentivises a Russian-Chinese partnership against the US. “America’s task is not to replace enmity toward Russia with a partnership,” he has stated. “It is to manage the current competition in ways that protect vital US interests while minimizing risks and costs, and allowing space for selective cooperation”.

The possibility of hiring Rojansky for the position resulted in an uproar by anti-Russian activists such as Bill Browder, a former Vladimir Putin supporter now wanted for tax evasion by Moscow, and the largest Ukrainian-American organization in the US, which were ultimately successful in preventing the appointment.

So where does that leave America in a post-Afghanistan age? Well, the fighting isn’t over yet – especially for the $714 billion, in annual spending, defence industry that will do almost anything to protect its survival.