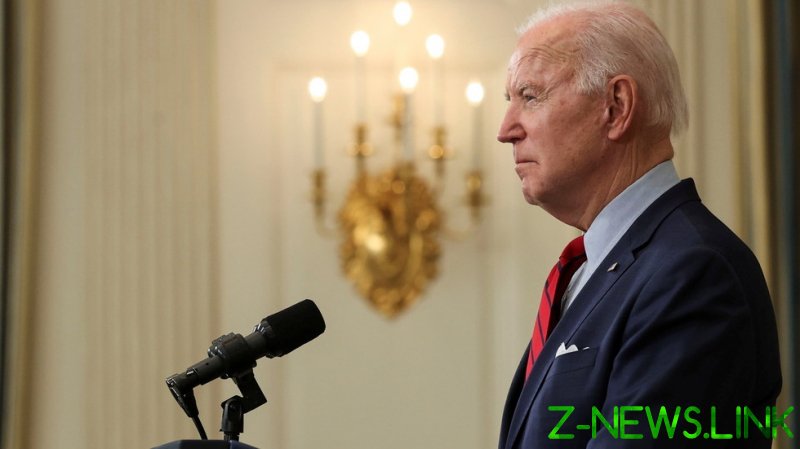 “I don’t need to wait another minute, let alone an hour” to take “common sense” gun control measures, Biden said on Tuesday, even as he admitted not knowing much about the identity of the shooter, his motivation, or the weapons he actually used.

“We can ban assault weapons and high-capacity magazines in this country once again. I got that done when I was a senator. It passed, it was the law for the longest time and it brought down these mass killings. We should do it again,” the president added.

Ten people, including one police officer, were killed in the attack on a King Soopers grocery store in Boulder on Monday afternoon. Police identified the suspect as Ahmad Al Aliwi Al-Issa, 21, shortly before Biden delivered his remarks at the White House on Tuesday.

Snapshots of what appear to be the alleged shooter’s social media postings, before they were deleted, show that he was an outspoken critic of former President Donald Trump and believed that an “Islamophobia industry” was responsible for the 2019 massacre at two mosques in Christchurch, New Zealand.

Biden’s remarks were a reference to the ‘Public Safety and Recreational Firearms Use Protection Act,’ a 10-year ban on “assault weapons” passed in 1994, during the presidency of Bill Clinton. The ban was part of the  Violent Crime Control and Law Enforcement Act, also known as the Biden Crime Law, that liberal Democrats have since blamed for the mass incarceration that disproportionately affected African-Americans.

While Democrats such as Biden and the ban’s author Senator Dianne Feinstein (D-California) have claimed that it reduced mass shootings and saved lives, multiple studies have shown it had “no significant effect” in that regard. A 2014 fact-check of Feinstein’s claim by the liberal-leaning Pro Publica concluded there was “no evidence” the 1994 ban actually saved lives.

Gun control advocates and Democrat lawmakers immediately called for another crackdown on firearms as the Boulder shooting unfolded on Monday. The Democrat-majority House of Representatives had already passed a bill to strengthen background checks on March 11, just five days before eight people were killed in a series of shootings in Atlanta, Georgia.

That spree was blamed on anti-Asian bigotry, even as the alleged perpetrator confessed his motive was sexual in nature.