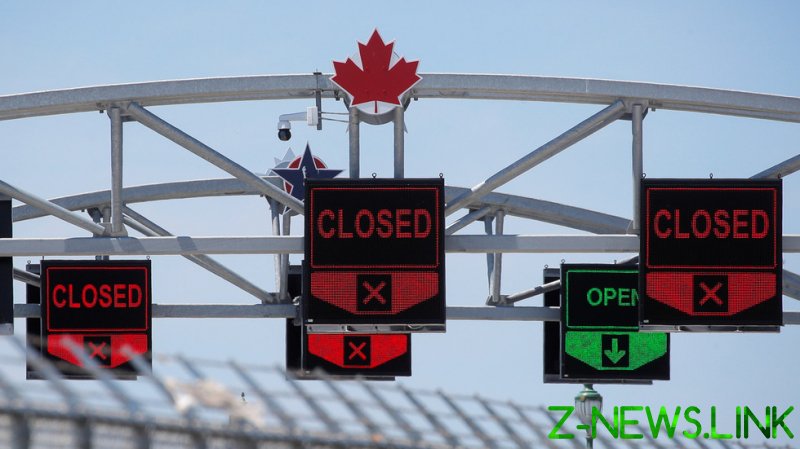 “Our number one priority as we fight Covid-19 is keeping Canadians safe. In coordination with the US, we are extending restrictions on non-essential international travel and with the United States until July 21st, 2021,” Canadian Public Safety Minister Bill Blair announced in a tweet on Friday morning, again extending the regime first imposed in March 2020.

While Ottawa said it will make exemptions for fully-vaccinated travelers by early July, until then the restrictions will continue to apply to all “non-essential” travel between the two neighbors.

Speaking at a midday press conference, Prime Minister Justin Trudeau insisted the world is “not out of this pandemic yet,” noting that the border would not reopen until Canada vaccinates 75% of its population with at least one dose of a coronavirus immunization, and 20% become fully inoculated.

“Even a fully vaccinated individual can pass on Covid-19 to someone who is not vaccinated,” he told reporters, adding that Canada needs to avoid “massive waves” of new infections.

Official data released soon after the PM spoke showed 73.4% of eligible Canadians had received their first shot, though fewer than 6% are fully vaccinated.

Despite lagging behind its vaccine targets, however, Canada has seen a steep drop in coronavirus cases in recent months as its population inches toward herd immunity, corresponding with a fall in the US numbers as well. To date, Canada has tallied a total of 1.4 million infections, dwarfed by some 33.5 million in the US, according to data compiled by Johns Hopkins University.

The mutual decision to keep the restrictions was denounced by American lawmakers on both sides of the aisle.

“There’s no other way to say it: another month’s delay is bulls**t,” said Rep. Brain Higgins (D-New York).

“Millions of Americans and Canadians are counting on our governments to work together to reach an agreement that provides a clear roadmap for reopening the border,” Higgins said in a joint statement with Rep. Bill Huizenga (R-Michigan). They jointly chair the House Northern Border Caucus.

Other members of Congress from New York – which borders Canada – were just as displeased. Rep. Chris Jacobs, a Republican, said the extension “is a complete failure of leadership” by both Biden and Trudeau.

House Republican Conference chair Elise Stefanik blasted the move as “absolutely unacceptable to the families, businesses and communities along the northern border.” Attacking Trudeau’s “incessant desire to delay,” she also singled out President Joe Biden for failing to press the issue at a recent G7 summit.

Stefanik was echoed by Senate Majority Leader Chuck Schumer, a New York Democrat, who called for a “concrete plan” to reopen “instead of endless delays and confusion.”

Not long after the extended border rules were announced, however, the Canadian province of Alberta declared plans to fully reopen, breaking with a more cautious approach favored by other regions. On July 1, Alberta will become the first jurisdiction in the country to drop all pandemic restrictions, in celebration of Canada Day.

“Don’t live in fear,” Alberta Premier Jason Kenney said on Friday. “We’re going to have a celebration on Canada Day about our new openness, and encourage people to get out there and support those small businesses that have been so hard hit in the past 16 months and do so with confidence.”

In addition to federal travel and quarantine mandates, Canadian provinces have imposed their own patchwork of restrictions. On a tour of anti-lockdown rallies last week in Manitoba, People’s Party of Canada leader Maxime Bernier was arrested for breaching local Covid rules. The central Canadian province has been described as a Covid-19 “hotspot” in media reports. Bernier was released last Friday, but faces up to a $100,000 fine and a year in jail, or both.