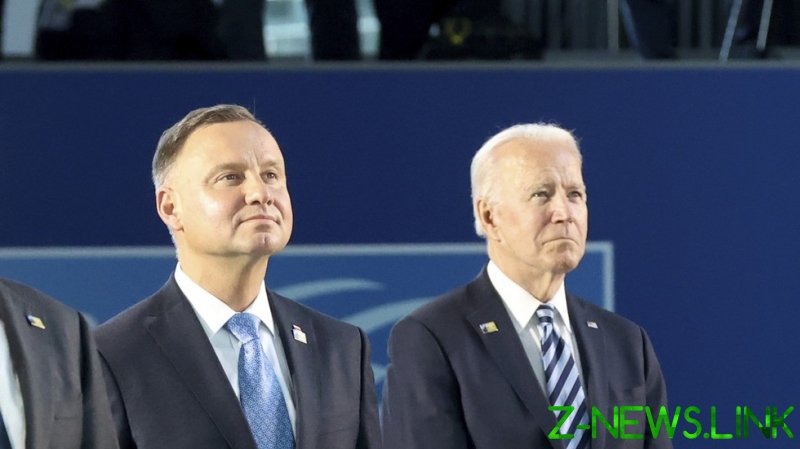 US President Joe Biden is set to travel to Poland this week to discuss further efforts to support Kiev and punish Russia for its military offensive in Ukraine.

According to White House Press Secretary Jen Psaki, Biden will meet with Polish President Andrzej Duda in Warsaw on Friday to discuss how the US and its allies are “responding to the humanitarian and human rights crisis that Russia’s unjustified and unprovoked war on Ukraine has created.”

The meeting will reportedly take place after Biden has traveled to Brussels, Belgium to meet with NATO allies and European Union officials to “discuss international efforts to support Ukraine and impose severe and unprecedented costs on Russia.”

While the Biden administration has provided military aid to Ukraine and imposed harsh sanctions on Russia, it has also sought to avoid direct conflict between the US and Russia.

This month, the Biden administration opposed plans to transfer Polish fighter jets to Ukraine, arguing that such a move would be too high risk. “We believe the provision of additional fighter aircraft provides little increased capabilities at high risk,” said Pentagon press secretary John Kirby at the time.

Russian President Vladimir Putin announced a “special military operation” in Ukraine on February 24, with a stated goal to “demilitarize and denazify” its government, ensuring that its NATO membership aspirations no longer pose a threat to either Russia or the newly recognized Donbass republics, which have suffered seven years of siege by Kiev forces.

The US and its allies have accused Russia of starting an “unprovoked invasion” to occupy Ukraine. Moscow has seen thousands of harsh new curbs and sanctions slapped on it as a result, with the US, the EU, and others seeking to “isolate” and “destroy” the Russian economy.