Home / WORLD / Biden to send Marines to guard US Embassy in Haiti, but says broader deployment ‘not on the agenda at this moment’

Biden to send Marines to guard US Embassy in Haiti, but says broader deployment ‘not on the agenda at this moment’ 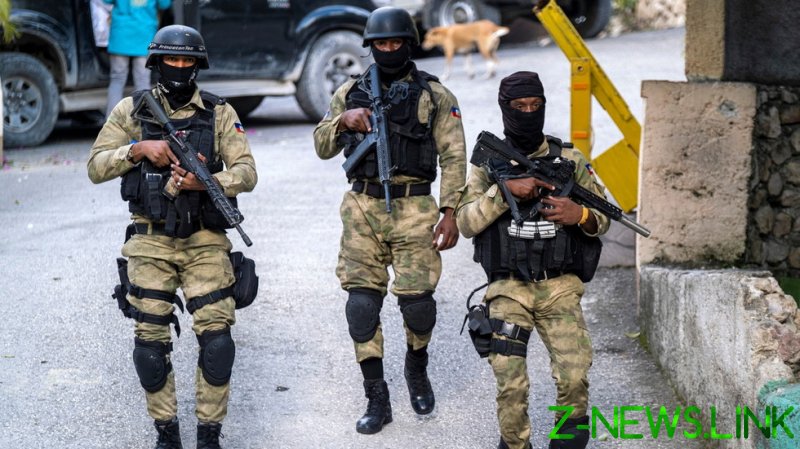 “We’re only sending American Marines to our embassy” to ensure “nothing is out of whack,” Biden said during a Thursday press briefing. “But the idea of sending American forces to Haiti is not on the agenda at this moment.”

The announcement comes after the White House previously appeared to rule out sending any troops, which had been requested by Haiti’s interim government in the days following Moise’s murder by gunmen last week.

Haiti’s elections minister Mathias Pierre responded to the president’s comments, telling the Associated Press that the country is in a “fragile” state and that the soldiers could be used for security ahead of elections set for September. He also suggested that Biden could still opt for a larger US mission beyond guarding the embassy in Port-au-Prince.

“This is not a closed door. The evolution of the situation will determine the outcome,” Pierre said, adding “In the meantime, the government is doing everything we can to stabilize the country, return to a normal environment and organize elections while trying to come to a political agreement with most political parties.”

Earlier on Thursday, the Pentagon acknowledged that “a small number” of Moise’s assassins received US training in the past. At the time, all were soldiers in Colombia’s armed forces, which have long kept close military ties with Washington. While the Defense Department did not specify how many were trained, the Haitian government has claimed that 28 foreign mercenaries carried out the presidential hit, two of them Haitian-Americans and the rest Colombian nationals. Nearly two dozen suspects have been taken into custody, while several were killed in firefights with police and at least five others remain on the run.

Some of the Colombians involved were reportedly hired by a Florida-based security firm, CTU, and flown to the neighboring Dominican Republic in the days before Moise was killed.

The Pentagon’s revelation came just days after the US Drug Enforcement Administration said that one of the murder suspects had previously worked as a “confidential source” for the agency. An unnamed law enforcement official later told Reuters the suspect in question was one of the Haitian-Americans, but added he was not an active informant when Moise was shot dead at his home last week.

In addition to the upcoming Marine deployment, Washington has dispatched officers with the FBI, the Department of Homeland Security and other federal agencies to assist Haitian authorities with their investigation. While the probe is ongoing, a Florida-based doctor of Haitian descent was arrested on Sunday on suspicion that he masterminded the assassination with plans to assume the presidency. The head of security at Haiti’s presidential palace, Dimitri Herard, was also detained on Thursday as part of the investigation, according to a Haitian prosecutor, though it is unclear what charges he might face.

American troops have been sent to Haiti on several occasions over the last century, with most recent deployments linked to disaster relief. In 1915, however, US Marines seized the Haitian capital and continued to occupy the country for nearly 20 years after an angry mob dragged Haitian President Vilbrun Guillaume Sam from the French Embassy and beat him to death. Washington effectively ran Haiti through a military junta for the duration of the mission, which saw two significant rebellions that were crushed by US forces. Thousands of revolting Haitians were killed in the uprisings, while allegations of extrajudicial executions, forced labor and torture were widespread.