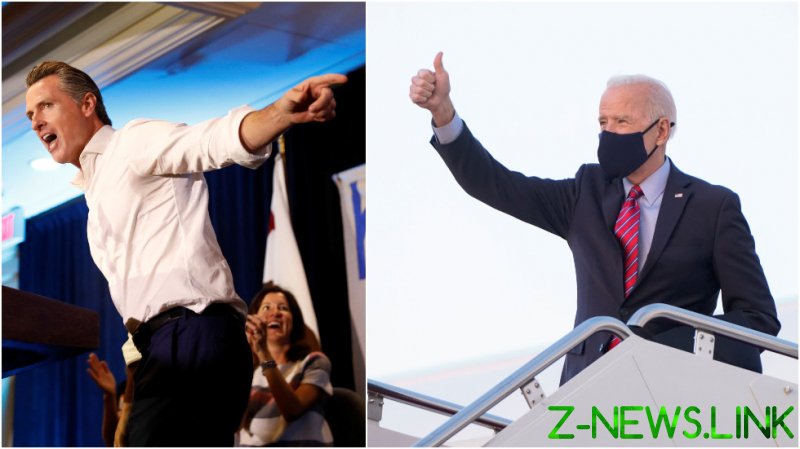 Biden’s spokeswoman, Jen Psaki, took to Twitter on Tuesday to voice support for the embattled governor, stating that the president considers him an ally in many areas and does not endorse the fast-growing recall campaign.

“In addition to sharing a commitment to a range of issues with Gavin Newsom from addressing the climate crisis to getting the pandemic under control, [President Biden] clearly opposes any effort to recall Gavin Newsom,” Psaki tweeted.

The statement appears to have been prompted by a reporter’s question on the recall campaign at a press conference earlier in the afternoon, where Psaki said she had not spoken to Biden about the issue, but that the president’s team remains “closely engaged” with Newsom.

The effort to force Newsom from office coincides with plummeting approval ratings for the Democrat governor. A Berkeley IGS poll conducted earlier this month showed a sizable 48-percent disapproval figure, 31 percent of whom said they opposed Newsom “strongly.” Driving that decline is an increasingly critical assessment of the state government’s response to the coronavirus pandemic, with just 22 percent of those surveyed offering a positive review of California’s vaccine roll-out, and a mere 31 percent rating Newsom as doing a good job in handling the virus overall.

Though Newsom took office in a landslide victory in 2018 and isn’t up for reelection until 2022, a growing number of dissatisfied Californians are demanding he end his term early. The California Patriot Coalition, led by retired Yolo County Deputy Sheriff Orrin Heatlie, is spearheading the recall campaign, already fundraising over $2.5 million and garnering some 1.4 million signatures on its petition.

“Governor Newsom has implemented laws which are detrimental to the citizens of this state and our way of life,” the petition charges, adding “People in this state suffer the highest taxes in the nation, the highest homelessness rates, and the lowest quality of life as a result.”

Recall organizers have until mid-March to gather 1.5 million signatures on the petition in order to trigger a special election, in which state residents would be asked to vote on whether to remove Newsom and to choose from a series of potential replacements. If successful, the governor’s recall would be only the second in California’s history, the first being Democratic Governor Gary Davis, who was replaced by Republican action film star Arnold Schwarzenegger after a recall vote in 2003. Since 2019, there have been no less than five separate attempts to recall Newsom, all of which have failed so far.

The Patriot Coalition’s efforts have drawn support from prominent figures in Republican politics, such as ex-House Speaker Newt Gingrich and former Arkansas Governor Mike Huckabee, as well as GOP upstarts like House hopeful Joe Collins, who’s embarked on a “Recall Road Trip” to 16 California cities to gin up support – and signatures – for the project.

The governor has condemned the recall campaign, issuing an all-caps statement in June warning that the initiative was being “pushed by political extremists” supporting then-president Donald Trump and alleging the special election would “cost California taxpayers 81 million dollars.” The California Democratic Party, meanwhile, dubbed the effort a “coup,” with party chair Rusty Hicks stating the drive is being led by “right-wing conspiracy theorists, white nationalists, anti-vaxxers” and “groups who encourage violence on our democratic institutions.”

The Biden administration’s vocal support for Newsom on Tuesday follows other cooperation between the governor and the new president, who has even drawn personnel from Newsom’s own team. Biden has tapped California Attorney General Xavier Becerry to lead the Department of Health and Human Services, and has poached University of California professor Eric Goosby from Newsom’s coronavirus task force. Further underscoring his affinity with the president, the governor joked that he would be “working hard” to convince his key staff not to jump ship to the Biden administration soon after the November 3 election, noting he was only speaking “slightly tongue in cheek.”