Home / WORLD / Biden thinks he’s a tough-talking cowboy in a Western, so he should solve his differences with Putin by drawing guns at high noon

Biden thinks he’s a tough-talking cowboy in a Western, so he should solve his differences with Putin by drawing guns at high noon 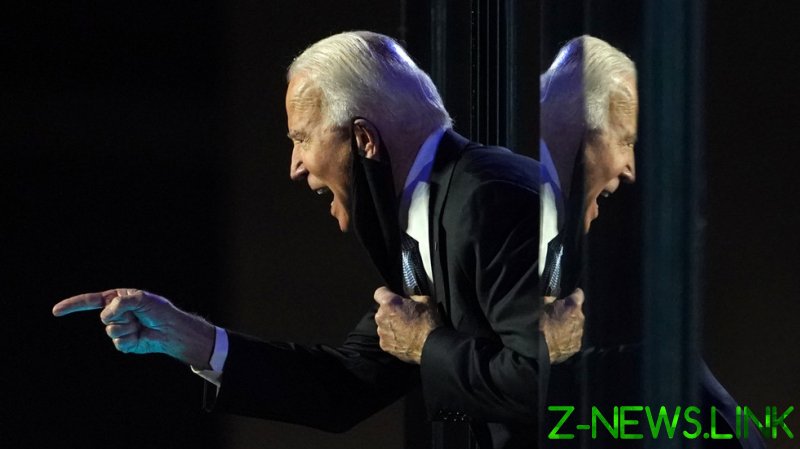 US President Biden’s response to a journalist asking if he thought Russian President Putin was “a killer” was, “Uh-huh. I do.” Rather than elaborate, Biden allowed himself to be hand-led straight into talk of “the price [Putin] is gonna pay.” How convenient.

Does Biden think that he’s living in a Western? In American Westerns, tough talk and reductio ad absurdum are the norm. Everything is black and white with no shades of grey, which is one reason why silent Westerns played well. No one needed words to explain what was happening on-screen. You knew who the bad guys and good guys were through grotesque oversimplification of characters and narratives. Later, when Westerns evolved to include sound, they featured gems like, “When you have to shoot, shoot – don’t talk,” (‘The Good, the Bad, and the Ugly’); “Any man don’t wanna get killed better clear on out the back,” (‘Unforgiven’); “You shoot to kill, you better hit the heart,” (‘A Fistful of Dollars’). And, of course, who isn’t ‘Wanted: dead or alive’?

Biden’s lingo would be right at home in any old- school American Western. As luck would have it, his Russian counterpart has just challenged him to the equivalent of a verbal gun draw at high noon.

In response to Biden’s remarks, President Putin said to Russian state TV: “I want to propose to President Biden to continue our discussion, but on the condition that we do it basically live, as it’s called. Without any delays and directly in an open, direct discussion. It seems to me that would be interesting for the people of Russia and for the people of the United States.”

“Interesting” would be an understatement. Biden should accept Putin’s offer for the simple reason that such a showdown would be historical. It’s a chance to air out all of the accusations and issues once and for all. But the stakes would be high, with nothing less than the public opinion of the entire planet up for grabs. A loss would severely limit the acceptability of any unilateral measures adopted at the expense of the other in the eyes of the very thing that has the power to start and end wars: public perception. It’s no surprise, then, that Biden’s camp has already suggested he’s too busy to countenance the idea.

The general lack of pushback on Biden in the US media is concerning. So, may as well let Putin do it. ABC’s interviewer George Stephanopoulos, a former White House senior adviser in President Bill Clinton’s administration, not only fed Biden the “killer” line that the president simply swallowed whole, but he then asked about the consequences that Putin should pay.

There was no pushback on whether Biden’s own record might draw attention to the fact that when you point your finger at someone else – to call them a “killer” in this case – three other fingers are pointing back at you. It’s hard to find a war that ultimately resulted in the deaths of innocents that Biden didn’t at least stumble into.

For example, to hear him tell it, he apparently pratfell into former President George W. Bush’s war in Iraq. In retrospect, many did who now regret doing so – and Biden appears to place himself in that category. Except that Biden was in a unique position to obtain the information required to make a more informed decision, given that he was either a ranking member or chairman of the Senate Foreign Relations Committee since 1997. Biden wasn’t just a helpless spectator.

Biden also played a key role in the US and NATO-backed slaughter in the former Yugoslavia. “In March 1999, I introduced a resolution authorizing President Clinton to use any means necessary to stop [Serbian President Slobodan] Milosevic’s ethnic cleansing in Kosovo. With Clinton resolved to act, NATO began bombing Serb targets in 1999,” Biden said in his book, ‘Promises to Keep’. Except that what Biden and Clinton framed as “ethnic cleansing,” some now consider an effort by Milosevic to wipe out Western-backed Islamic jihadists.

Speaking of which, Biden also backed NATO’s removal of Libyan President Muammar Gaddafi that ultimately led to his death and has since sparked many more deaths through civil war and human trafficking. Apparently undeterred by this failure, Biden then championed the same fate for Syrian President Bashar al-Assad – yet another American foreign policy failure which led to countless civilian deaths through conflict between US-backed “rebels” and Syrian government forces.

As former President Barack Obama’s vice-president, Biden also supported the use of unmanned drones in the Middle East and Africa for targeted killings that sometimes took out civilians. Whoops.

I mean, sure, maybe it was their fault for getting between the US government and a terror suspect, but doesn’t that technically also make Joe Biden a “killer”? Is there not more than enough evidence to legitimately apply that term to Biden himself? Even leaving aside these historical aggressions, Biden just ordered yet another bombing on the Iraq-Syria border, and he’s barely been in office two months.

Why was there not a peep about any of this hypocrisy from interviewer Stephanopoulos? Instead, he led Biden straight to talk of anti-Russian consequences – and he was only too happy to oblige. Perhaps because economic sanctions are the goal, and the anti-Putin accusations and rhetoric are all just a means to manipulate public opinion to that end. Biden’s “killer” propaganda and campaign against Russia risk interfering with the nascent rapprochement between the leading nations of the European Union and Russia, with projects like the Nord Stream 2 pipeline to provide energy to Europe via Russia hanging in the balance.

As American journalist Matt Taibbi recently suggested, the American press seems to be largely suffering from “Sovietization” and can’t seem to pry its lips from Saint Biden of Bombardments’ behind. Cutting out the middle men and letting both leaders go at it, mano a mano, would be a big win for the entire world.