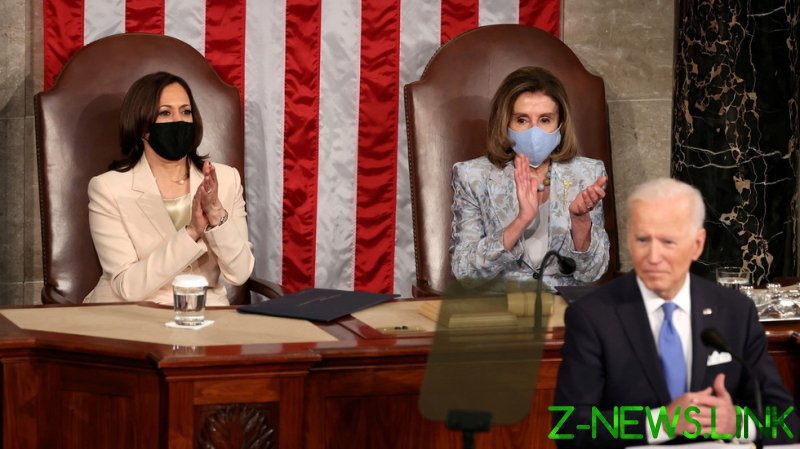 The US leader gave his first joint address to lawmakers on Wednesday night, touching on a range of topics from infrastructure to immigration.

Judging by television viewership, the speech wasn’t exactly a blockbuster event. It’s estimated that approximately 22.6 million Americans watched Biden speak on broadcast TV channels, compared to the 43 million who tuned in for Donald Trump’s first address to Congress in 2017.

However, Biden received high marks from his audience. A CBS poll found that 85% of Americans who watched the US president speak “overwhelmingly” approved of his speech.

While revealing the polling results, CBS News’ director of elections and surveys, Anthony Salvanto, said his organization spoke to “a representative sample of the audience nationwide who watched the speech,” and ultimately found that 85% of people liked what they heard. Salvanto stressed, however, that “the audience was majority Democrats watching it” – a distinction that “you’ve got to know” to properly understand the data.

Conducted with the help of YouGov, the survey included 943 adults who watched Biden’s address. Of those, 54% were Democrats and 25% were independents, while only 18% identified as Republicans.

While the political leanings of the poll’s participants clearly favored Biden, CBS never claimed that the results were representative of the entire country, stating that the 85% approval rating was limited to “speech watchers.”

Actor and filmmaker Rob Reiner dubiously declared that “85% of Americans” applauded Biden’s speech. “It’s time for Republicans in Congress, who stand for nothing, to get out of the way and let the majority rule,” he wrote.

Numerous others on social media identified themselves as among the “85% of Americans” who supported what the president told Congress.

The misleading claims did not go unnoticed. Many noted that far, far less than 85% of Americans actually tuned in to watch the speech, making Reiner’s pronouncement highly suspect. Some pointed to the number of ‘dislikes’ that the speech received on YouTube as anecdotal evidence suggesting that Biden’s address was actually a flop.

Controversial “fact check” site Snopes.com even ran an article labeling the actor’s tweet as “False,” noting that the statistic “refers to the approval rating among Americans who watched the speech, not the country as a whole.”

Others took aim at CBS. The conservative National Pulse accused the outlet of running a “stunningly duplicitous story” based on the survey data, claiming that CBS failed to make it clear that most people who watched the speech were Democrats.

Democrats weren’t alone in twisting the facts, however. In a tweet, Rep. Lauren Boebert (R-CO) incorrectly stated that CBS had reported that “85% of Americans approved of Joe Biden’s speech last night.”