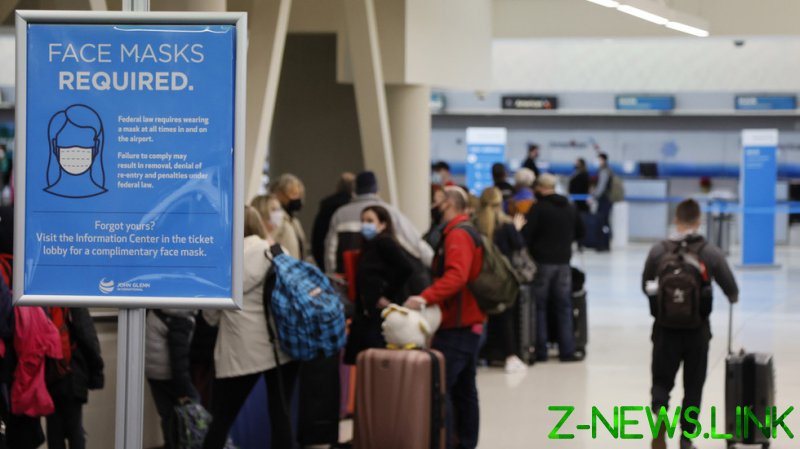 Forcing Americans to mask up while traveling goes beyond what US health authorities are legally allowed to do, a new lawsuit coming from Texas argued on Wednesday, demanding the end of the mandate that has been in effect for over a year now.

Congresswoman Elizabeth Van Duyne (R-Texas) filed the lawsuit in a federal court on Wednesday, joined by the Texas Public Policy Foundation (TPPF) nonprofit and the state’s Attorney General Ken Paxton. The US government was named as the defendant, along with the Department of Health and Human Services (HHS), the Centers for Disease Control and Prevention (CDC), and their leaders.

“It is time for all mandates to be lifted, including those affecting airline passengers,” Van Duyne said, accusing the CDC of causing “untold damage” to the US with its “constantly changing science, fluctuating recommendations and oppressive need to control all aspects of society.”

The lawsuit argues that the CDC’s mask mandates amount to an abuse of power and violate constitutional authority – the same reasoning used to successfully challenge the agency’s eviction moratorium in May 2021 and vaccination mandates for cruise lines in July.

“The CDC is relying on specific and narrowly tailored provisions in the law to exercise enormously broad powers Congress has not granted the agency,” said TPPF’s senior attorney Matt Miller. The organization’s general counsel Robert Henneke also denounced the “tyranny” of the Biden administration in the name of Covid-19.

Announcing that he joined the lawsuit, AG Paxton described the mask mandate as “anti-science, virtue-signaling” and called it “not only silly, but illegal too.”

In his very first executive order, President Joe Biden mandated the wearing of face masks on federal property and announced a “100-day masking challenge.” That was 392 days ago. The requirement that travelers on planes, trains, buses and other public transit must wear face coverings went into effect on February 1, 2021 and has been extended three times since. It is currently set to expire in March, unless renewed.