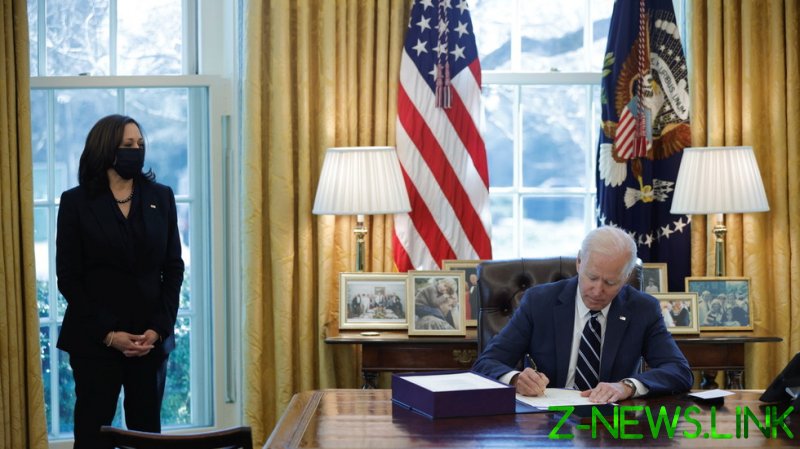 In a brief photo opportunity at the White House on Thursday afternoon, Biden called the American Rescue Plan a “historic legislation” that is about “rebuilding the backbone of this country,” and said it had broad support among all Americans.

He told the reporters gathered at the Oval Office that he will have “a lot more to say” in his address to the nation scheduled for Thursday evening, and that there will be “plenty of opportunities” for questions later, ignoring their shouted inquiries after the signing.

The House of Representatives approved the final version of the bill on Wednesday in a 220-211 vote, with one Democrat joining all of the Republicans in opposition. It had passed in the Senate on a similar party-line vote of 50-49, with no Republican votes in favor and one senator, Dan Sullivan (R-Alaska) abstaining.

Democrats have argued the bill gives much-needed relief to Americans impacted by the coronavirus lockdowns, which began exactly a year ago. They were criticized by the progressive wing of the party for making the one-time direct payment only $1,400 – as opposed to the $2,000 promised by Biden – while the Republicans bristled at billions allocated to what they called a partisan “wish list” of things unrelated to the pandemic.

At one point during the Senate deliberations Sen. Ron Johnson (R-Wisconsin) moved to have the entire 628-page bill read aloud. With Democrats controlling the White House and both chambers of Congress, however, there was little the opposition could do to stop the bill.

The $1,400 payments will go to Americans who earn $75,000 a year or less, with those earning $80,000 or above getting nothing. A $300 a week unemployment benefit was extended through August. Another $350 billion was allocated to state and local governments, to make up for revenue losses caused by lockdowns, while $50 billion was set aside for small businesses unable to work.