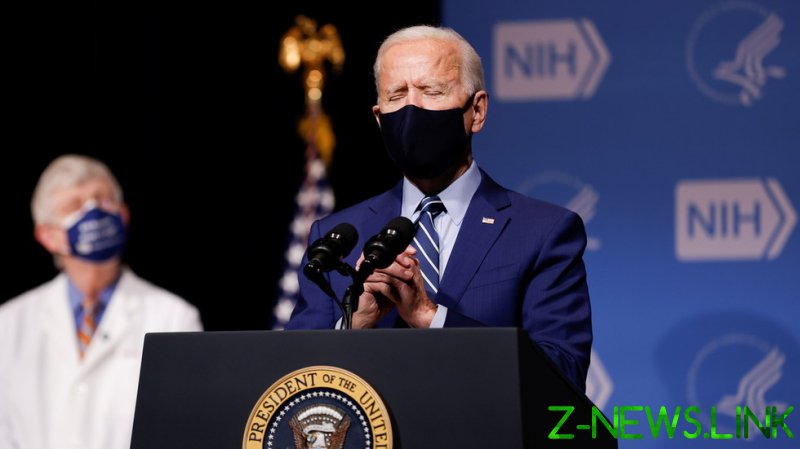 Biden “certainly would support a study of reparations” and the “continuing impacts of slavery,” White House press secretary Jen Psaki told reporters at a briefing on Wednesday. “He continues to demonstrate his commitment to taking comprehensive action to address the systemic racism that persists today,” and the reparations study is one part of that “across-government” approach, she added.

The statement came as a House subcommittee debated a bill that would fund a study of “slavery and discrimination in the Colonies and the US from 1619 to the present and recommend appropriate remedies,” including possible reparations to black people. Representative Sheila Jackson Lee (D-Texas), a member of the Congressional Black Caucus, reintroduced the bill in January.

The latest progress in the push for reparations marks a shift in the Democratic Party, after such leaders as former President Barack Obama, 2016 presidential nominee Hillary Clinton and Senator Bernie Sanders (D-Vermont) declined to endorse such a program. But with identity politics becoming even more of a driving force in Democrat campaign strategy, reparations became a serious issue in the party’s primary elections.

Biden wouldn’t commit on the campaign trail to funding reparations, but he did signal support for studying the idea. He told the Washington Post that “there can be no realization of the American dream without grappling with the original sin of slavery.” With Democrats also controlling the House and Senate, the study may finally have a chance to go forward after being proposed for decades.

The political push is so intense that CNN reported Tuesday on a Harvard Medical School study asserting that reparations could have reduced Covid-19 deaths among blacks.

But even if the study bill is passed and signed by Biden, the reparations movement may be a long way from making slavery-compensation payments a reality. Among other issues, the government would have to decide whether payments would go to all black Americans, all blacks in America, or only descendants of slavery. Congress also would need to define who is considered black, or how a person would prove his or her qualifications for payment. Then there would be the question of how to pay for reparations, which would essentially mean penalizing non-black taxpayers for their skin color.

READ MORE: ‘We gotta have them speaking about reparations’: Rapper Ice Cube set to meet with Biden as US president vows ‘racial equity’

Or perhaps reparations would need to go further. Writer Tiffany Elliott argued that reparations represent a necessary “repentance of our national sin” and should be extended to “all undesirables,” including women, homosexuals, transgender people and HIV victims. In her view, apparently, only heterosexual and able-bodied white and Hispanic males would need to fund payments to virtually everyone else. Most wouldn’t be descendants of slaveholders, and some would be migrants to the country.

Of course, pushback can be expected from those white males and other conservatives. “This is insane for people to have to pay for other people’s horrific mistakes that we had nothing to do with,” said conservative commenter Chastity Guinn.

Other observers said support for reparations – or even studying reparations – is contrary to Biden’s message of uniting the country. Still others pointed out that Republicans enacted the true remedy for slavery by ending it. Many observers suggested that merely supporting a study wouldn’t lead to any real action, and Psaki’s statement was an artful way to “say no without using that word.”

“Joe, you only won because you’re not Donald Trump, period,” one commenter said. “Try this stuff, and you’ll lose your House and Senate majorities as independents and libertarians hit the
polls hard to stop the idiocy.”