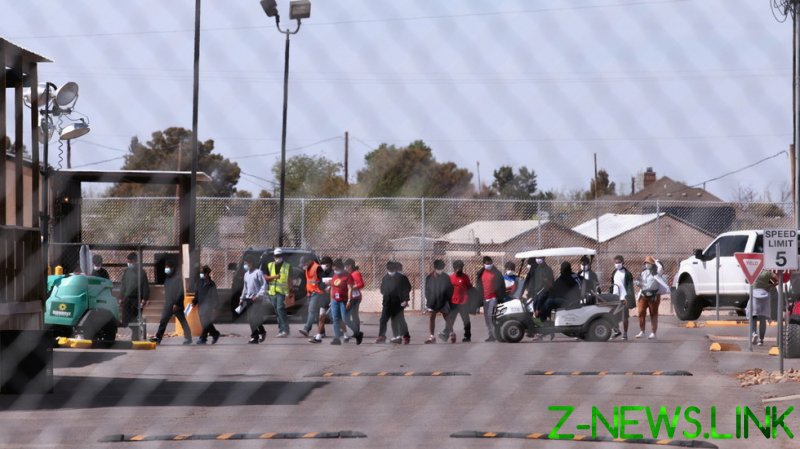 The Houston area shelter operated by the National Association of Christian Churches (NACC) saw a flurry of activity over the weekend as buses arrived and departed to transfer some 500 young girls living there elsewhere, video shot by ABC News showed.

Nearly 130 of the girls were expected to be handed over to the care of a sponsor, while others were set to be transferred to different facilities or reunited with relatives.

The US Department of Health and Human Services (HHS) announced on Saturday that all children housed there “will be immediately unified with sponsors or transferred to an appropriate facility” of the Office of Refugee Resettlement. The HHS did not elaborate on why a center opened only two weeks ago was so abruptly shut down.

Reports by US media, however, suggested conditions at the ‘Emergency Intake Site’ were less than humane. Hundreds of girls, aged between 13 and 17 on average, spent most of their days on makeshift cots surrounded by boxes in an overcrowded warehouse-turned-shelter, ABC reported on Monday, citing its sources.

Cesar Espinoza, the head of migrant civil rights organization FIEL, who visited the facility, said the girls “were not allowed to get up, unless it was to shower, or to use the restroom. Even their meals were delivered to their cots.” Espinoza also said that he saw “desperation” in the girls’ eyes that was “unbearable and incredible.” Another source said girls were eventually told to use plastic bags for toilets since there were not even people to accompany them to a restroom.

A White House spokesperson told the network the facility was closed because it “did not meet the Biden administration’s very high standard for child welfare.” The NACC, which operated the facility, is an organization that has its roots in disaster relief and has no previous experience in caring for unaccompanied children.

Despite the lack of experience, the NACC was awarded a four-million-dollar contract to operate the warehouse. The organization’s president Jose Ortega told the Houston Chronicle, however, that his organization had no intention of taking the job, but that he was “begged” by HHS Secretary Xavier Becerra to help out.

The HHS now claims the NGO was vetted using “standard” procedures. Espinoza called for the procedures to be reviewed. Meanwhile, Representative Al Green (D-Texas) argued that the Houston facility was never designed to be a permanent shelter at all.

“I visited the facility (on) April the 8th. I went with the understanding that this was a temporary facility, with no intention of this being a permanent housing facility for the girls,” he said, adding that he was happy to know the girls are being placed with “friends, family and sponsors.”

The Houston facility was among the additional migrant centers created by the US administration amid a surge in illegal immigration. Thousands of children were held at US border facilities in March, forcing US authorities to open “decompression centers.”

Many children were held in exactly the same facilities that Democrat politicians and media outlets decried as “kids in cages” during Donald Trump’s presidency. The number of children crossing into the US increased sevenfold following Biden’s reversal of many of Trump’s immigration policies.

On Saturday, Biden admitted the situation on the border is indeed a “crisis” – something his administration had avoided saying for weeks.