Biden sets low bar on school reopenings, targets resuming in-person teaching at half of schools ‘ONE DAY A WEEK’ by late April 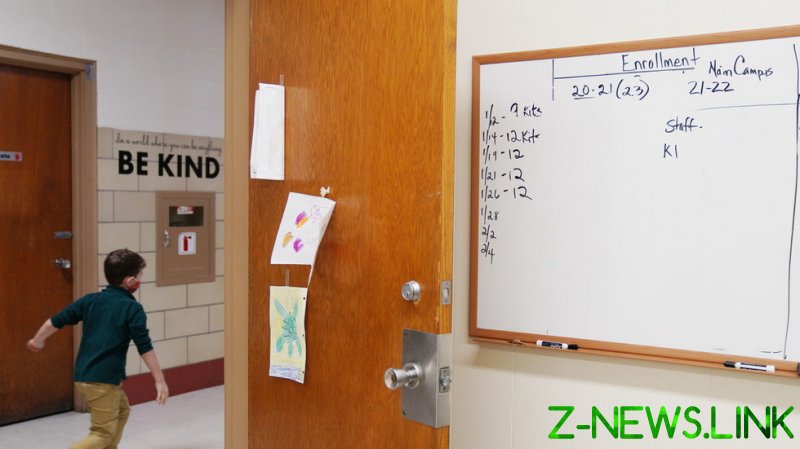 “His goal that he set was to have the majority of schools – so more than 50 percent, open by day 100 of his presidency, and that means some teaching in classrooms,” White House press secretary Jen Psaki told reporters on Tuesday. “So, at least one day a week, hopefully it’s more, and obviously it is as much as is safe in each school and local district.”

That means that nearly half of US K-8 schools could still be closed, and the other half could have as little as one class taught once a week. The Biden administration’s tiptoeing around the issue comes amid intense pressure from teachers unions to keep schools closed or delay reopenings because of their concerns about catching Covid-19 – even after many private schools resumed normal in-person classes last summer.

Chicago’s public school system was forced to hire as many as 1,000 temporary workers to supervise students in classrooms while their teachers give their lessons remotely.

Biden declined late last month to urge Chicago teachers to return to schools after their union voted to defy an order by administrators to resume in-person classes.

Asked whether he believed teachers should return to school, Biden said, “I believe we should make school classrooms safe and secure for the students, for the teachers and for the help that’s in those schools maintaining the facilities.” Psaki said Biden wouldn’t intervene in Chicago Mayor Lori Lightfoot’s impasse with teachers: “He is hopeful they can reach common ground as soon as possible.”

Biden himself has called it “a national emergency” that about 20 million US children have been kept out of classrooms for nearly a year. Deprived of socialization and normal school activities, vulnerable children are at a higher risk for suicide. NRP reported earlier this month that hospital providers in at least seven states across the country reported a surge in admissions of suicidal children.

A flurry of student suicides in and around Las Vegas prompted the Clark County district to fast-track the resumption of some in-person teaching last month.

In the absence of school breakfast and lunch programs, which adds to other woes, such as  their parents losing income due to the pandemic, children increasingly face food insecurity. According to Feeding America non-profit, more than 50 million people nationally, including 17 million children may now suffer from food insecurity due to the pandemic.

Ironically, Biden may have set the bar so low on his reopening goal that little or no progress will be needed in his 100-day plan to meet the goal. An Education Next study done in November and December found that 47 percent of students had some in-person classes at least once a week. According to the Burbio School Opening Tracker, Biden could pat himself on the back even before getting to work. It found that 64 percent of elementary and middle schools students were getting some in-person instruction.

The CDC has said that schools can safely reopen, even without teachers first being vaccinated.

In fact, former CDC director Dr. Robert Redfield said in November that schools are one of the safest places K-12 students can be amid the pandemic. “There’s extensive data that we’ve gathered over the last two to three months to confirm that K-12 schools can operate with face-to-face learning, and they can do it safely, and they can do it responsibly,” he said.