Biden scores majority approval after 100 days, but the numbers don’t add up 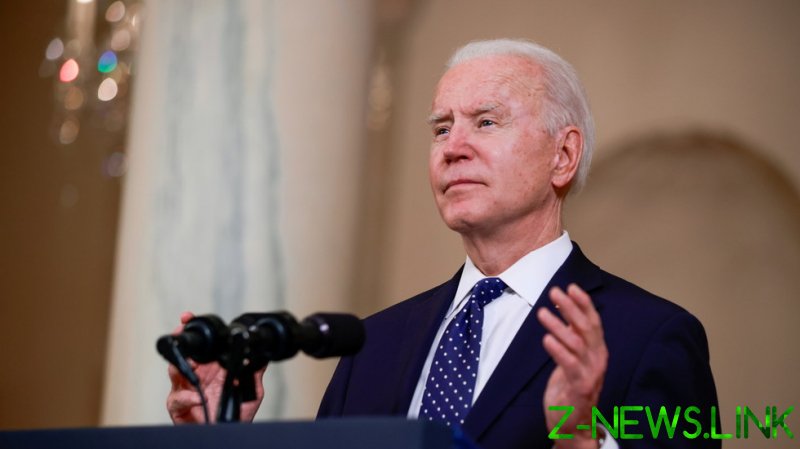 Biden’s first 100 days in office have been busy. A slew of executive orders did away with nearly all of Donald Trump’s policies as the Democratic president opened up the country’s Mexican border, launched a bid for gun control and banned key fossil fuel projects. The coronavirus vaccine rollout continues at home, while internationally, Biden has hit Russia with economic sanctions and strained relations with Turkey by recognizing the Armenian genocide.

A majority of Americans agree with his progress thus far, according to an ABC/Washington Post poll published on Sunday, which found that 52% of adults say they approve of the job Biden is doing, while 42% disapprove, a near reversal of Trump’s ratings after his first 100 days. Biden scored highly – 63% – on his handling of the Covid-19 pandemic, and averagely – 52% – on his management of the US economy. However, 53% of respondents disapproved of his performance on immigration, as unprecedented numbers of illegal immigrants pour across the Mexican border.

With the public apparently onside, some mainstream media outlets have taken to celebration. AP, for example, cheered on his efforts to “wrestle the country away from the legacy and agitations of President Donald Trump,” and praised his “unabashedly liberal” agenda. Biden’s personality was celebrated too. “The temperature is lower. The drama is less. And the persona is fundamentally different,” AP wrote.

Behind the media’s praise and the apparently positive poll figures, however, is a different story. Biden’s approval rating may be 10 points above Trump’s at this time in 2017, but it’s the third-lowest since Gallup began tracking approvals during the Harry S. Truman administration. Only Trump, with 42% approval, and Gerald Ford, with 48%, scored lower.

ABC and the Washington Post did note this information, and warned that six in 10 voters want Biden to compromise and work with Republicans in Congress more, instead of using the Democratic Party’s razor-thin majority to push through liberal legislation.

What neither the Post nor ABC mentioned, was that the poll oversampled Democrats by nine points. Some 33% of respondents identified as Democrats, 24% as Republicans, and 35% as independents. The remainder were either unsure or identified with minor parties. Previous research has found that political independents generally favor Democrats by four points, so with all of this taken into account, Biden’s true approval rating could be several points lower.

Yet the results as they stand are open to interpretation. NBC News described Biden’s rating as “strong,” while ABC highlighted the high approval for his pandemic response out of the other issues polled.

Fox News, on the other hand, zeroed in on Biden’s mismanagement of the border to hammer the Democratic president.

That partisanship is borne out in the figures. High disapproval ratings were rarely recorded until the 1990s, save for Ford’s 32% spike after he pardoned his predecessor, Richard Nixon. Jimmy Carter, Ronald Reagan and George H.W. Bush all enjoyed sub-22% disapproval ratings, but Bill Clinton’s disapproval soared to 39%. Trump set new records with his 53% disapproval rate in 2017, but that number was as much a reflection of partisan division as it was a rejection of Trump, considering Biden’s 42% figure is the second-highest since records began.