Home / WORLD / Biden says US ‘combat mission’ in Iraq will be over by year’s end, but won’t say how many troops to remain deployed

Biden says US ‘combat mission’ in Iraq will be over by year’s end, but won’t say how many troops to remain deployed 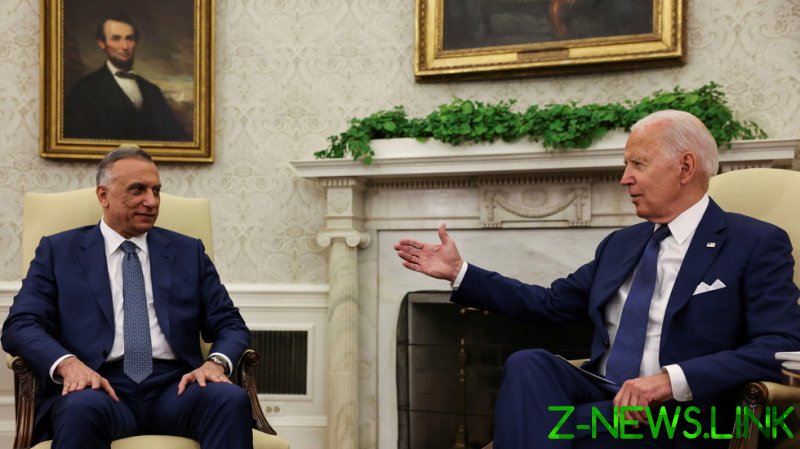 Speaking during a meeting with Iraqi Prime Minister Mustafa al-Kadhimi on Monday, Biden said the US will fully transition to ‘advise and assist’ operations come year’s end, though noted that “counterterrorism cooperation” would continue.

“Our role in Iraq will be… to be available, to continue to train, to assist, to help and to deal with ISIS as it arrives. But we’re not going to be, by the end of the year, in a combat mission,” the president said.

While he was asked how many US troops he would like to see in Iraq by the end of 2021, Biden avoided the question, saying only that “things are going well” and reiterating that the combat mission would not continue beyond the end of the year.

There are currently around 2,500 American soldiers in Iraq, down from over 5,200 after a series of small drawdowns ordered by ex-President Donald Trump. While US forces already play some advisory role for local troops, their previous emphasis on combat operations against the Islamic State (IS, formerly ISIS) are set to end.

Despite the shift in focus, with no troop withdrawal in store, some defense experts have argued that the announcement amounts to little more than a symbolic act, with the Economist’s Middle East correspondent Gregg Carlstrom dubbing it a “PR gesture.”

Retired Brigadier General Mark Kimmitt – who served as the deputy director for operations in Iraq under the George W. Bush administration – also said the decision is unlikely to have “a significant operational impact” so long as “the non-combat intelligence, advisory and logistic missions continue with the same troop levels.”

While US officials told the New York Times last week that the White House was likely to agree to a drawdown and would announce a deadline on Monday, no date was given following Biden’s meeting with the Iraqi PM. Moreover, the officials said the US soldiers would merely be reclassified to other roles, suggesting few would actually leave the country.

Prime Minister Kadhimi hailed the “strategic partnership” between Baghdad and Washington during his sit-down with Biden, saying that the US “[helps] Iraq” and that “together we fight, fight and defeat ISIS.”

Though he said bilateral ties are now “stronger than ever,” American combat operations in Iraqi territory have dealt blows to relations in recent weeks, with Kadhimi issuing a harsh statement condemning US airstrikes carried out in June as “a blatant and unacceptable violation of Iraqi sovereignty and Iraqi national security.”

The sorties were launched against militia groups alleged to be backed by Iran, which Washington says are behind a string of rocket attacks on US forces. President Biden has ordered several similar strikes since taking office, continuing a policy of his predecessor, who oversaw the assassination of Iranian Quds Force head Qassem Soleimani near the Baghdad airport in January 2020. The Soleimani strike, which also killed a top Iraqi militia commander, triggered fierce protests in Iraq, with local lawmakers voting to expel US forces from the country, though the effort never came to fruition.

While it is unclear if Kadhimi broached the subject of a US troop withdrawal at any point during Monday’s meeting, earlier this month his office said he discussed the issue with a top White House envoy, and that a pullout could be part of a “new stage in strategic cooperation.” The Biden administration soon rubbished the claim, however, with a senior official telling Newsweek it “was not true.”

Following a round of meetings with Iraqi officials on Monday, the US State Department also noted that the American mission will “fully transition to a training, advising, assisting, and intelligence-sharing role” by December 2021. The Iraqi side stressed that bases housing US troops operate under local law and “are not US or Coalition bases,” adding that all foreign troops are in the country at the government’s invitation.