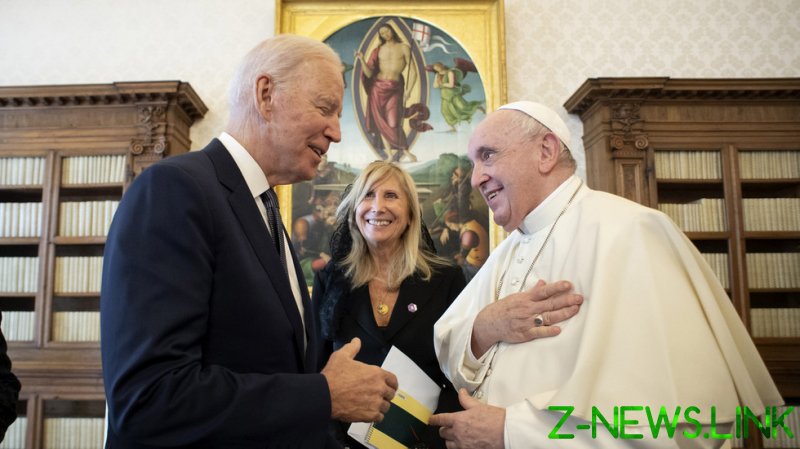 Following a meeting between Biden and Pope Francis at the Vatican on Friday, Biden answered “no” when reporters asked if the two had discussed abortion.

“We just talked about the fact he was happy I was a good Catholic and I should keep receiving communion,” he said.

Conservative Americans expressed outrage over the Pope’s alleged statement, arguing that “a good Catholic doesn’t support baby murder” and that Biden should not be allowed to take communion.

One social media user called for both Biden and the Pope to be “ex-communicated from the Church,” while others were skeptical that the Pope really had made such comments.

“Yeah, will need to hear from the Pope for this one. Considering his views on abortion, it is highly improbable he said that,” one Catholic traditionalist weighed in. Another proposed that Biden’s quote was “probably a grave distortion of what the pope said.”

Since his inauguration in January, Biden – the second Catholic US president in history following President John F. Kennedy – has reversed anti-abortion policies of the previous administration and attempted to stop Texas from implementing a controversial law banning abortions once a heartbeat has been detected in the womb.

Though 67% of American Catholics think Biden should not be disqualified from communion over his views on abortion, 55% of Republican Catholics do, according to a Pew Research poll this week.

Catholic bishops in the US have also repeatedly debated whether Biden should be allowed to receive communion, with Archbishop Joseph Naumann, who chairs the US Conference of Catholic Bishops, calling the president’s position a “grave moral evil.” Naumann has questioned how the president could call himself a “devout Catholic” while supporting things “contrary to the Church’s teaching.”

Pope Francis has stood against calls to deny Biden communion, saying in September that “communion is not a prize for the perfect…communion is a gift, the presence of Jesus and his Church.”

The Pope also stressed, however, that “abortion is murder” and that “those who carry out abortions kill.”