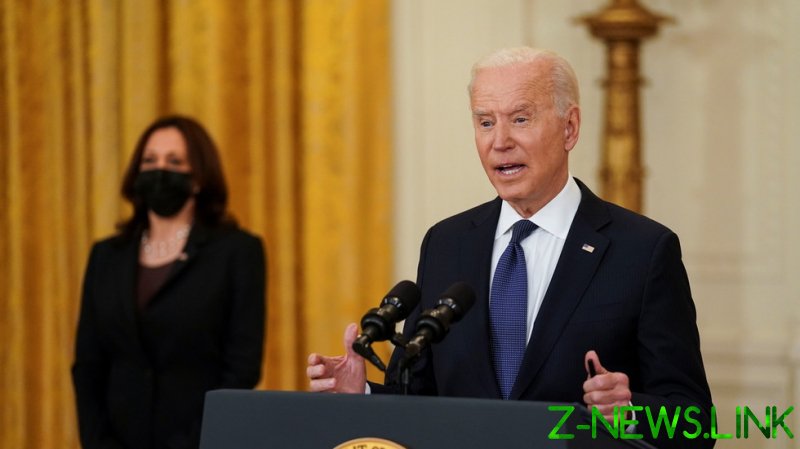 A ransomware attack on Friday shut down a gasoline and diesel pipeline running 5,500 miles along the entire US East Coast. Operated by the Colonial Pipeline Company, the vital fuel artery normally transits 100 million gallons per day from Texas all the way to New York. The Biden administration responded by invoking emergency powers to enable truckers to transport more fuel, as traders scrambled to import fuel by sea from Europe.

Addressing the attack on Monday, Biden initially threw cold water on the claims of Russian involvement, instead blaming “transnational criminals.”

“So far there’s no evidence from our intelligence people that Russia is involved,” Biden told reporters. However, he followed that statement by saying that the ransomware used “is in Russia,” and Russia therefore has “some responsibility to deal with this.”

Rumors of Russian involvement were stoked by several mainstream media outlets over the weekend, after it emerged that ‘DarkSide,’ a criminal hacking organization believed by CNN’s anonymous sources to be based in “a Russian-speaking country,” was responsible for the attack. In a short statement on Monday, the FBI confirmed “that the DarkSide ransomware is responsible for the compromise of the Colonial Pipeline networks.”

Other media outlets took the opportunity to link the hackers to the Russian government, “whether they work for the state or not,” in the words of one cybersecurity consultant to NBC.

Biden said that he will discuss the attack with Russian President Vladimir Putin when the pair meet face to face. Though a meeting date is still being hashed out, Biden has previously expressed confidence that he will meet his Russian counterpart sometime in June, possibly during Biden’s visit to Europe for the G-7 summit that month.

Ransomware attackers typically encrypt a company’s data, locking the firm out of its own systems until a ransom is paid. It is still unclear whether the Colonial Pipeline Company intends to pay its hackers. Speaking at the same White House press conference on Monday, Anne Neuberger, the deputy national security adviser for cyber, said that the decision whether to pay or not “is a private-sector decision and the administration has not offered further advice at this time.”

Colonial said on Monday that it is working on “a return to service in a phased approach.” As of Sunday, service had only been restored to a few small “lateral lines,” with four ‘mainlines’ still shut off. The continuing outage has sparked fears that gas prices may soar past $3 per gallon. As of Monday, the national average price per gallon of gasoline stood at $2.97, a 60% increase from a year ago, when the coronavirus pandemic suppressed prices.