Biden says Germany is marching ‘in lockstep’ with Washington 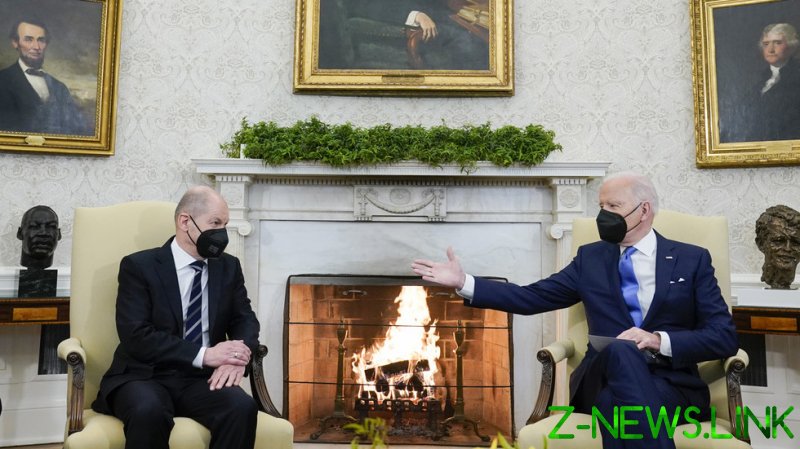 Welcoming Germany’s Chancellor Olaf Scholz to his first official visit to the White House, US President Joe Biden on Monday declared that Washington and Berlin are working closely together on a number of global issues, such as the Ukraine crisis.

“To state the obvious: Germany is one of America’s closest allies. We’re working in lockstep to further deter Russian aggression in Europe, and address the challenges posed by China, and promote stability in the Western Balkans,” Biden said, as the two leaders spoke to the press with the White House fireplace crackling behind them.

Biden did not clarify what “aggression” he was referring to, or offer any proof thereof. He and Scholz will also discuss the Covid-19 pandemic, climate change and other issues, Biden said.

This is Scholz’s first state visit to the US since he was sworn in as chancellor. He met Biden in person last October at the G20 summit, when he was still Germany’s finance minister.

Biden’s claim that he’s working “in lockstep” with Germany against Russia comes after reports that Berlin had barred fellow NATO member Estonia from selling German weapons to Ukraine. Flight radars also showed British deliveries of weapons and equipment to Kiev routing around German airspace, though no official reason was ever given.

The US has claimed for over three months that a Russian “invasion” of Ukraine was impending, despite Moscow dismissing the accusation as “fake news” and even the government in Kiev saying there is no need to panic.

On Monday, Berlin said that it was sending 350 German soldiers to Lithuania, describing the deployment as Germany’s “contribution to NATO’s eastern flank and sending a clear signal of determination to our alliance partners.”

As Biden and Scholz met in Washington, French President Emmanuel Macron was in Moscow for a meeting with his Russian colleague Vladimir Putin.

Germany is a major customer for Russian natural gas, and has been importing it both via the Nord Stream pipeline under the Baltic Sea and the Soviet-era pipelines running through Ukraine. Nord Stream 2, a second pipeline under the Baltic that could double the volume of gas bypassing Ukraine, has been completed and is waiting for permits by German regulators – a process apparently being held hostage to the “invasion” drama.

Berlin has also been a key partner of Washington in partitioning Yugoslavia – the region Biden on Monday described with the euphemism “Western Balkans” – in the 1990s and promoting certain states created during that process, while pressuring others, ever since.