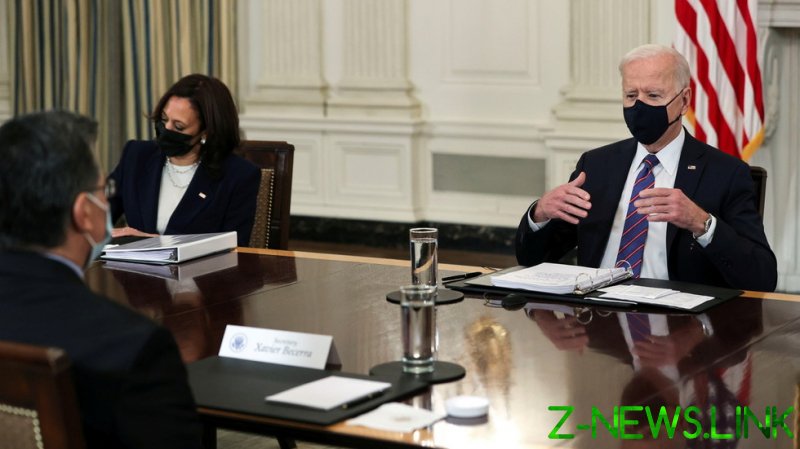 Biden announced on Wednesday that Harris will be in charge of their administration’s response to what a senior official described to reporters as the “flow of irregular migrants to the US.”

Harris is supposed to “implement a long-term strategy that gets at the root causes of migration,” by both sorting out the situation at the border with Mexico and working with the Central American countries of El Salvador, Honduras and Guatemala to establish a “strategic partnership” that is “based on respect and shared values,” one administration official told reporters.

While the officials in the “Biden-Harris administration” – per the White House’s newest press guidelines and updated website and social media headers – pointed out that Harris is stepping into the same role Biden played during the Obama administration, the position isn’t without its pitfalls.

On Monday, Harris dismissed a media question about whether and when she might visit the border with a cackle and “Not today.” The response was in line with the current administration’s policy of pretending there was no problem at the border, to the point of insisting on not calling it a “crisis” but using euphemisms such as “situation” or “challenge.”

After a frustrated congressional Democrat representing the Texas district dealing with the surge released photos of the overcrowded detention centers, however, both Biden and Harris changed their tune.

Asked about the border on Wednesday in a CBS News interview, Harris described it as “a huge problem,” adding “I’m not gonna pretend it’s not.”

Announcing her elevation to border czar later in the day, Biden also acknowledged there is a problem on the border – but blamed it on natural disasters and his predecessor Donald Trump.

“This new surge we’re dealing with now started with the last administration, but it’s our responsibility to deal with it humanely and to stop what’s happening,” he said at the White House.

In Biden’s telling, the migrants rushing to the US-Mexico border are fleeing both poverty and violence but also “natural disasters: hurricanes, floods, earthquakes” and Trump is to blame because he “did nothing” about it and “eliminated” the $700 million program for aiding the Central American nations.

The surge indeed started during the Trump presidency – right after Biden was announced the winner of the November 3 election, that is. The day before his inauguration, a man from Honduras traveling through Mexico told CNN that Biden was “going to help all of us, he’s giving us 100 days to get to the US and give us legal… papers, so we can get a better life for our kids, and for our families.”

Other migrants showed up to the US-Mexican border wearing T-shirts with Biden’s campaign logo and the words “Please let us in.” Time and again, migrants who spoke with reporters told them that Biden’s immigration policies were a key factor in their decision to set off for the US.

“Expectations were created that with the government of President Biden there would be a better treatment of migrants. And this has caused Central American migrants, and also from our country, wanting to cross the border thinking that it is easier to do so,” Mexican President Andres Manuel López Obrador told reporters on Tuesday.

Within days of his inauguration, Biden had issued executive orders reversing all of Trump’s immigration policies, from the construction of a border wall to the “remain in Mexico” rule for asylum-seekers, while promising a law that would give those in the US illegally a “path to citizenship.”

He did so even after career officials at US Customs and Border Patrol warned his transition team that it would cause a crisis on the border, according to the Washington Post. The transition officials themselves identified “a surge of unaccompanied minors and a dearth of shelter space exacerbated by the pandemic” as the greatest concerns.