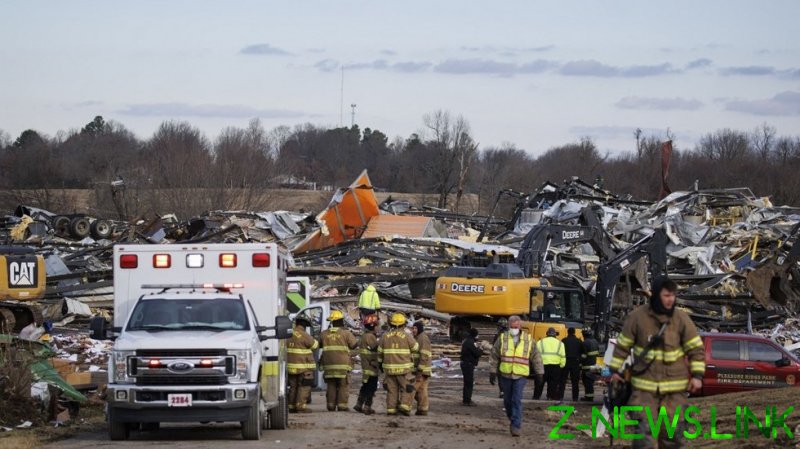 A swarm of tornadoes ripped through six US states on Friday night, leaving significant devastation in their wake. Kentucky was particularly badly affected, with Governor Andy Beshear describing the damage as “unlike anything that I have ever seen,” and predicting a possible death toll of over 100.

The town of Mayfield, which sits in the far west of Kentucky near the state’s borders with Illinois, Missouri, and Arkansas, was almost completely leveled. Some 110 workers were trapped inside a candle factory, and Beshear stated in a press conference on Saturday morning that “we’ll lose at least dozens of those individuals.”

However, he added that around 40 people had been rescued from the rubble. One of these rescued workers posted a video to Facebook before being pulled from the ruins, in which the panicked cries of her trapped co-workers could be heard.

Similar scenes played out in Edwardsville, Illinois, where up to 100 workers were trapped when the Amazon warehouse they were working in collapsed, and in Monette, Arkansas, where a nursing home was caved in by a tornado.

Biden on Saturday “directed that Federal resources be surged immediately” to the worst-affected areas, according to a White House statement. “To lose a loved one in a storm like this is an unimaginable tragedy,” the president added on Twitter. “We’re working with Governors to ensure they have what they need as the search for survivors and damage assessments continue.”