Home / WORLD / Biden once described packing the Supreme Court as a ‘bonehead idea… a terrible mistake.’ So, why’s his party doing it now?

Biden once described packing the Supreme Court as a ‘bonehead idea… a terrible mistake.’ So, why’s his party doing it now? 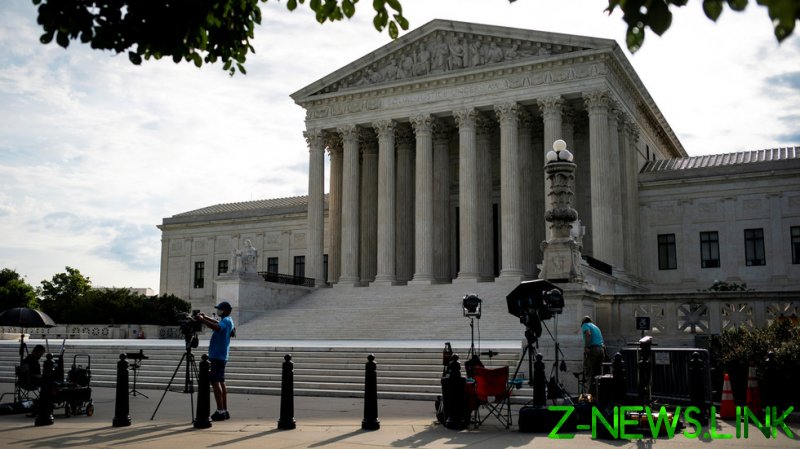 Just 86 short days ago, Joe Biden was sworn in as the 46th president of the United States. The theme of his inauguration was ‘America United.’ In his first speech to the nation as president-elect, he vowed he would be the one to unite the country after Donald J. Trump’s tenure, and openly placed the collective ills of our nation over the past 244 years on the back of his political rival.

He bellowed into a microphone, “I pledge to be a president who seeks not to divide, but to unify. Who doesn’t see red and blue states, but the United States. And who will work with all my heart to win the confidence of the whole people.”

He echoed his self-styled role as “unifier-in-chief” in his inaugural address, saying, “For without unity, there is no peace – only bitterness and fury. No progress – only exhausting outrage. No nation – only a state of chaos. This is our historic moment of crisis and challenge, and unity is the path forward.”

It is extraordinary to think that Biden truly meant what he said, for he has done nothing to heal America – he’s done the very opposite. Keeping one’s promises, doing what is right and not what is politically expedient, and proving through action, not rhetoric, is what brings people together, rather than empty platitudes. Biden has not yet completed 100 days of his presidency and, judging by his actions as well as his inaction, he is on course to go down as the most hyper-partisan and divisive president in American history.

It is hard to know whether Biden is fully in control of either his own presidency or his legacy. Many argue he is not, and question whether he is the titular head of the new Democratic Party or just serving as a puppet-placeholder while the radical factions consolidate power.

Here’s what we do know, the Democratic Party is wasting no time leveraging its majorities before the 2022 mid-term election to push its radical agenda through hostile power grabs. It does not care if its actions are seen as dangerous to democracy, or inflammatory, unconstitutional, and blatantly hypocritical. It believes it has one more bite at the political apple to remake America in its image, finishing the job the Obama-Biden presidency set out to do. It wants to fundamentally transform the country – by force if needs be – from center right to far left, by indoctrinating our government institutions, culture, media and electorate with anti-capitalist, revolutionary policies not seen since the days of the New Deal or the Great Society.

It sounds sinister, doesn’t it? That’s because it is. The radical, progressive Democrats are in charge and hold the majority in both the House and the Senate, thus having power over the national purse, presidential appointments and the making of laws that affect every citizen, because they control the executive branch tasked with enforcing those laws, including immigration and securing our borders.

They also control the majority of the ‘free’ press, which is supposed to serve as a fourth estate, holding power accountable, but now does the bidding of a party that uses the jackass as its official symbol. The only branch of government they do not control is the judiciary – for now. But the institutional power grab is on, the virtue signaling has begun, and the case for court packing has been laid out.

On April 15, 2021, House and Senate Democrats, led by Rep. Jerry Nadler (D-NY), and Sen. Ed Markey (D-Mass), introduced a bill to expand the number of Supreme Court justices from nine to 13. It was a move that drew a less than enthusiastic response from White House Press Secretary Jen Psaki, and had both the Republican Party leadership and Speaker Nancy Pelosi immediately pledging to kill the bill.

The idea that such a partisan and divisive piece of legislation could have been proposed without the approval of the president, house speaker or Senate majority leader is a telling sign that the radical progressive rank and file members of the Democratic Party are boldly challenging their leaders. It begs the question, who’s really in charge, and are the inmates running the asylum?

It is clear that the Democrats who proposed this extreme change to the Supreme Court have either lost sight of or are purposely ignoring the true vision of the framers of the Constitution, who took up the task of creating three independent and co-equal branches of government. When the framers drafted Article III, they established the federal judiciary as a branch of government, to serve as a power check for the legislative and executive branches if their actions violated the Constitution. Its first sentence reads, “The judicial power of the United States, shall be vested in one Supreme Court, and in such inferior courts as the Congress may from time to time ordain and establish.”

Thus, in order to abide by the Constitution, the Supreme Court as a body must remain entirely separate from the Presidency and the Congress. This week, Biden signed an executive order creating the Presidential Commission on the Supreme Court, a 180-day “study” to examine the makeup of the court and explore future reforms, including the number of justices. While the size of the court has fluctuated since its creation in 1789, the number of justices at any given time has remained at nine for 152 years.

Although the Supreme Court can technically be expanded by an act of Congress, “court packing” is seen as a political weapon by one party that seeks to shape and tilt the ideological balance of the court in their favor. It has traditionally been highly frowned upon by both political parties, as history has shown us through the failed attempt by President Franklin Roosevelt, at the height of his popularity, to expand the court to as many as 15 justices in order to “pack” it and counter the justices who were hostile to his New Deal.

So, does Biden truly believe the Supreme Court’s composition needs to be changed? Well, Senator Biden, when chairman of the Senate Judiciary Committee from 1987 to 1995, made his position pretty clear, stating, “President Roosevelt clearly had the right to send to the United States Senate and the United States Congress a proposal to pack the court. It was totally within his right to do that. He violated no law. He was legalistically, absolutely correct…

“But it was a bonehead idea,” Biden went on. “It was a terrible, terrible mistake to make. And it put in question, for an entire decade, the independence of the most significant body – the Congress included, in my view – in this country, the Supreme Court of the United States of America.”

Now, 38 years later, President Biden has either forgotten his declared position on “court packing” or is appeasing a growing radical force within the Democratic Party that seeks to further divide the nation and destroy the vision our founding fathers and framers created generations ago.

This is why knowing and studying history and giving context is so important. History allows us to hold our elected officials accountable for their words and their actions. Lack of accountability also happens to be one of the driving forces of social media censorship in the modern political era. If you can silence your opponents online and in the public square, you can eliminate all political dissent. The same is true for a complete opposition government in which one party controls all three political branches. Put simply, it’s un-American.

As Thomas Jefferson once said in ‘Democracy in America’, “The executive power in our government is not the only, perhaps not even the principal, object of my solicitude.

The tyranny of the legislature is really the danger most to be feared, and will continue to be so for many years to come. The tyranny of the executive power will come in its turn, but at a more distant period.”

His words are now truer than ever as the legislature under radical Democratic control is flexing its majority power at every level to the extent and degree of undermining our Constitution.

Markey is the lead Senate sponsor on the bill to expand the Supreme Court from nine to 13 seats. However, in 2016, he was also one of the leading voices behind ‘We Need Nine’.

In 2016, the Democratic Party launched the campaign on social media in support of Judge Merrick Garland’s 2016 Supreme Court nomination under Obama and Biden, emphasizing the need for an empty seat on the Supreme Court to be filled. Screenshots from the Senate Democrats’ official Twitter account also show tweets saying, “We need nine justices on the court.”

Fast-forward five years, and Biden, along with the Democrats who supported the “We Need Nine” campaign, have now done a complete 180 out of partisan spite in reaction to Trump legitimately appointing three Supreme Court Justices to the court during his presidency.

But, of course, when conservatives said before November’s election that this was exactly what would happen, the Democrats and their media puppets said it wouldn’t. More lies.

In the past five years, three slots on the Supreme Court opened up, and the Democrats would rather undo the workings of a duly elected president, ignore the will of the people, and create an imbalance within the court so that Republicans are denied any true representation or political power in America for generations to come.

It is nothing but tyranny of the legislature, as Jefferson proclaimed, and it is something we should all fear. It is at times like these when we realize how right our founding fathers and framers were in their forewarnings and predictions.

Biden’s grandiose words ring hollow. He has no control of the radical members of his party, the leftist media, or the mob. Therefore, there is no unity and no peace, bitterness reigns alongside outrage and fury, and no progress is made. As Biden predicted, we have no nation, only a state of chaos, but that is because he is not in charge, he is the puppet-placeholder while the radical factions consolidate power. He is allowing the boneheads to run both the Democratic Party and the United States of America.