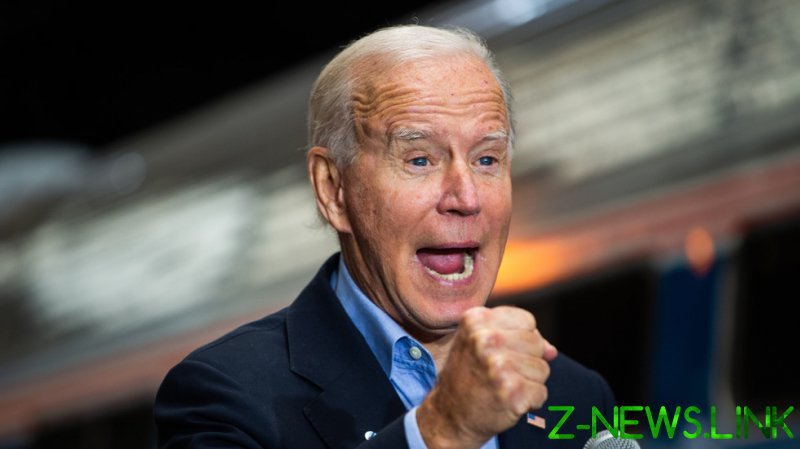 While doing a small interstate campaign tour on Wednesday, the 77-year-old politician was filmed frequently coughing to the point of sometimes having to clear his throat before continuing speaking.

Biden appeared to have put some Americans on the alert, as both his supporters and Donald Trump’s began obsessing over the footage and speculating on the candidate’s health.

Some immediately went with the worst-case scenario, calling Biden “Covid Joe.” Others chastised the presidential hopeful for coughing into his hand and not his elbow – supposedly the safe way, according to Biden himself.

Others went with more far-reaching theories, saying that the septuagenarian was coughing to gain “sympathy points” with voters, or even saying it is due to his alleged use of “cognitive enhancement pharmaceuticals.”

His supporters on the other hand, expressed “concern” over the elderly statesman’s condition.

The situation took a new turn when both President Trump and First Lady Melania Trump tested positive for Covid-19 late Thursday night. The news came several days after Trump and Biden did a highly-contentious in-person debate in Cleveland, Ohio. They stood at a safe distance from each other and agreed not to shake hands.

Nevertheless, people including journalist Julia Ioffe and actress Patricia Arquette worry that Biden may have been infected as well. “Has Joe Biden been tested for #COVID19 after standing indoors with a confirmed covid patient who spent nearly two hours screaming at him?” Ioffe tweeted.

Others wrote online that Biden and his running mate Kamala Harris “need to be tested asap.”

“Waiting for a report that Biden has tested negative for Covid-19,” author and diplomat Michael McFaul wrote.

Biden’s health, both physical and mental, has for months been the target of speculation and attacks, as he could become the oldest person to enter the presidency in US history. The topic of the man’s supposed fragility is frequently brought up his opponent, Donald Trump.

The president often calls Biden “Sleepy Joe” for his supposed low energy, and frequently claims he is in cognitive decline, once saying that Biden is “not all there.”