Home / WORLD / Biden mulling Afghanistan AIRSTRIKES to destroy US military equipment abandoned to Taliban, but only after evacuations – reports

Biden mulling Afghanistan AIRSTRIKES to destroy US military equipment abandoned to Taliban, but only after evacuations – reports 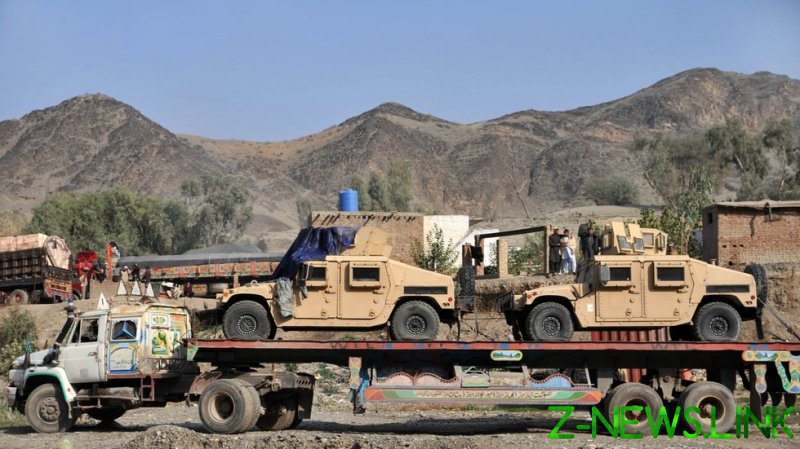 US officials told Reuters there is concern that military aircraft, vehicles and weapon stockpiles seized by the Taliban during the group’s offensive could be used against Afghan civilians, or find their way to terrorist organizations such as Islamic State or Al-Qaeda.

“Everything that hasn’t been destroyed is the Taliban’s now,” one source told the news agency on Thursday.

The US government is now reviewing its options, including the possibility of launching airstrikes to take out large hardware such as helicopters – although policymakers are reportedly concerned that the move would antagonize the Taliban at a time when the United States is rushing to evacuate personnel and citizens from the country.

A US official told Fox News on Friday that there is “no chance” of air strikes while American evacuations are underway.

According to one estimate, the Taliban now has in its possession more than 2,000 US humvees and other armored vehicles, and as many as 40 aircraft – including Black Hawks, scout attack helicopters, and military drones.

One of the US officials told Reuters that between 40 and 50 aircraft had been flown to Uzbekistan by Afghan pilots fleeing the Taliban. Much of the remaining hardware requires frequent maintenance, making it unlikely that the Taliban’s so-called Islamic Emirate would be able to repurpose the weaponry.

But the Taliban will still be able to take advantage of the large arsenal of 600,000 infantry weapons, including US-made M16 assault rifles, provided to Afghan forces since 2003. The Pentagon also gifted around 162,000 pieces of communications equipment and 16,000 night-vision goggles to the ANA – whatever remains is presumably now in the hands of the Taliban.

“Ironically, the fact that our equipment breaks down so often is a life-saver here,” one official told the outlet.

Rep. Michael McCaul (R-Texas), a ranking member on the House Foreign Affairs Committee, warned that losing the weapons to the Taliban “poses a significant threat to the United States and our allies.”

Over the past several weeks, videos have emerged showing Taliban fighters inspecting spoils of war, including US-made weapons seized from the Afghan National Army (ANA). The ANA completely collapsed as the US-led coalition began to accelerate its withdrawal from the country. According to reports, some Afghan units surrendered without a fight to advancing Taliban forces, handing their weapons and equipment over to the militant group.

President Joe Biden has stressed that the US military did all it could for Afghanistan during its nearly 20-year stay in the country. In a speech pushing back against critics of the withdrawal, the US president blamed Afghanistan’s leaders and military for failing to stand up to the Taliban.