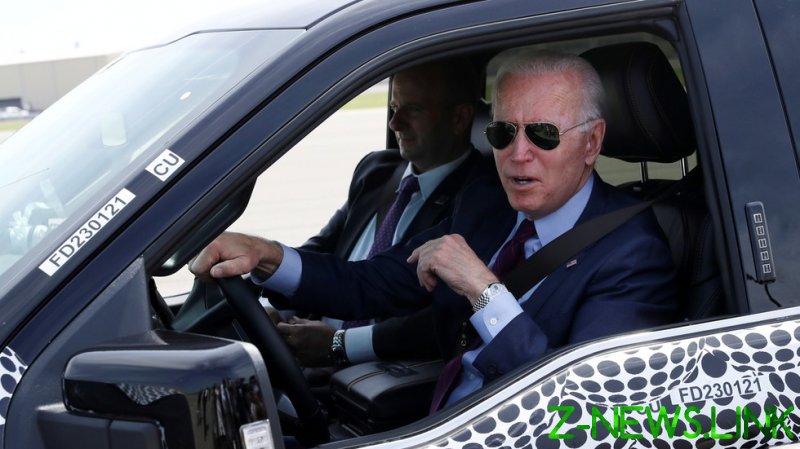 Video from a Ford testing site in Dearborn, Michigan, shows Biden driving the F-150 Lightning truck model on a test runway, with the White House correspondents throwing him softball questions and laughing along – except for one female reporter.

“Mr. President, can I ask you a quick question on Israel before you drive away since it’s so important?” she can be heard asking.

“No you can’t. Not unless you get in front of the car as I step on it,” Biden replies, to laughter from the reporters. “I’m only teasing,” he added, then drove off, ignoring the question.

The press gathered at the testing site for an “unscheduled stop,” and White House press secretary Jen Psaki wouldn’t say if Biden would be the test-driver.

Among the questions he was asked upon driving up were “Would you buy one of these?” and “How does it feel behind the wheel?”

After he drove off, the gaggle could be heard laughing and calling the whole thing “fantastic,” with someone calling Biden “best test driver ever.”

There were no complaints about a threat to murder a reporter – even if made in jest – that would have been the talk of all cable channels had it been made by his predecessor Donald Trump.

The president was visiting Michigan on Tuesday to announce an ambitious push for switching the US auto industry – which has fallen on hard times in recent decades – over to electric cars.

“The future of the auto industry is electric. There’s no turning back,” Biden said at the Ford plant in Dearborn.

While Biden’s cabinet has proposed a $2 trillion infrastructure proposal, critics have pointed out that only 5% of that investment would go towards roads and bridges, while the vast majority would be spent on “social engineering” programs.

On Monday, major outlets reported that the Biden administration has green-lit the sale of $735 million worth of bombs and missiles to Israel. The news came as Israel and the Gaza-based Hamas and Islamic Jihad militants continued to exchange fire in a week-long conflict sparked by protests in Jerusalem.

Tags about after biden getting jokes reporter running