Home / WORLD / Biden hails end of ‘relentless war’ in first UN speech, but vows to focus on ‘Indo-Pacific’ amid tensions with China

Biden hails end of ‘relentless war’ in first UN speech, but vows to focus on ‘Indo-Pacific’ amid tensions with China 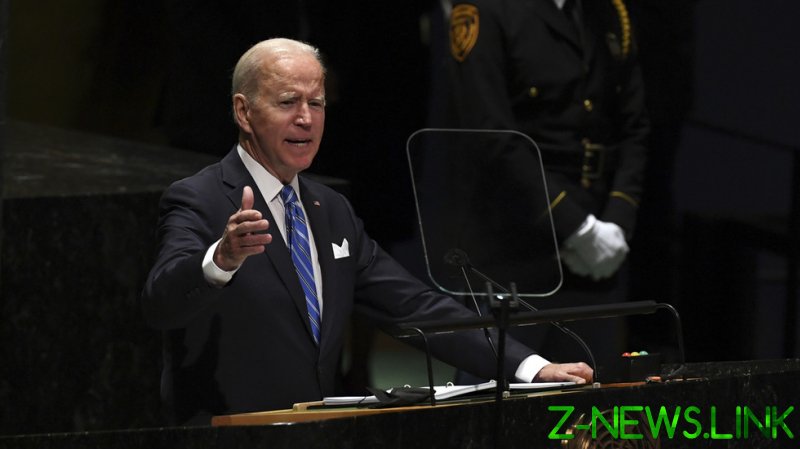 Taking the podium at the United Nations General Assembly in New York for the first time as president, Biden painted the US’ disastrous withdrawal from Afghanistan as a success, given that the two-decade war was finally brought to an end under his watch.

“We’ve ended 20 years of conflict in Afghanistan, and as we close this period of relentless war, we’re opening a new era of relentless diplomacy,” he announced, adding that the US will not continue “to fight the wars of the past.”

Conflict was a central theme of Biden’s speech, and he described the coming decade as “an inflection point in history.”

The US will refocus its priorities on the Indo-Pacific region, Biden stated, before claiming that he was not seeking a “new Cold War” – despite increasing tensions with China. However, while Biden promised to “do so with our allies and partners through cooperation and multilateral institutions,” his recently unveiled security partnership between the US, UK, and Australia has left America’s European allies snubbed, with French Foreign Minister Jean-Yves Le Drian condemning the “lies,” “duplicity,” and “brutality” of the deal, which will see Australia buy nuclear submarines from the US and UK instead of France as previously planned.

In keeping with his campaign messaging of a more cooperative US on the world stage, Biden called on his fellow leaders to work together to fight climate change and the “borderless” threat of Covid-19. The American president delivered a globalist message of international cooperation and “global action on shared challenges,” highlighting his administration’s rekindling of ties with the World Health Organization and rejoining of the Paris climate agreement, as well as a pledge to spend $100 billion on helping the developing world combat global warming.

Back in the realm of military affairs, Biden stressed that the winding down of the ‘War on Terror’ will not mean the end of the US’ fight against terrorism.

“Those who commit acts of terrorism against us will continue to find a determined enemy in the United States,” he stated. “Today, we’re better equipped to detect and prevent terrorist threats and we are more resilient in our ability to repel them and to respond.”

Biden, however, has drawn scathing criticism for the confusion surrounding the US evaluation of Kabul that allowed an ISIS-K suicide bomber to kill 13 US troops at the city’s overcrowded airport last month, and for a retaliatory drone strike that wiped out a family of Afghan civilians, killing zero terrorists.

While ISIS-K and Al-Qaeda members are reportedly operating in Afghanistan once again, Biden’s anti-terror crusade will also seemingly focus on his own citizens.

“We must also remain vigilant to the threat of terror that terrorism poses to all our nations, whether emanating from distant regions of the world or in our own backyard,” he said, echoing the words of former President George W. Bush at a 9/11 memorial event in Pennsylvania earlier this month, when he declared that “there is little cultural overlap between violent extremists abroad and violent extremists at home,” whom he called “children of the same foul spirit.”

Bush’s words were seen as a threat by conservatives and supporters of former President Donald Trump, who have repeatedly been labeled “insurrectionists” and “domestic terrorists” by the media since the infamous riot on Capitol Hill in January. The FBI and Department of Homeland Security have spent their energies in recent months on fighting the supposed threat of “domestic terrorism,” all while the most audacious domestic terror plots in recent memory were organized by the FBI itself.

Despite what many see as a humiliating retreat from Afghanistan, amid diplomatic fury over his latest security deal, and even with his approval ratings plummeting in a divided US, Biden closed his half-hour speech on an optimistic note.

“I stand here today, the first time in 20 years the United States is not at war. We’ve turned the page. All the unmatched strength, energy, commitment, will and resources, our nation are now fully and squarely focused on what’s ahead of us, not what was behind,” he said.