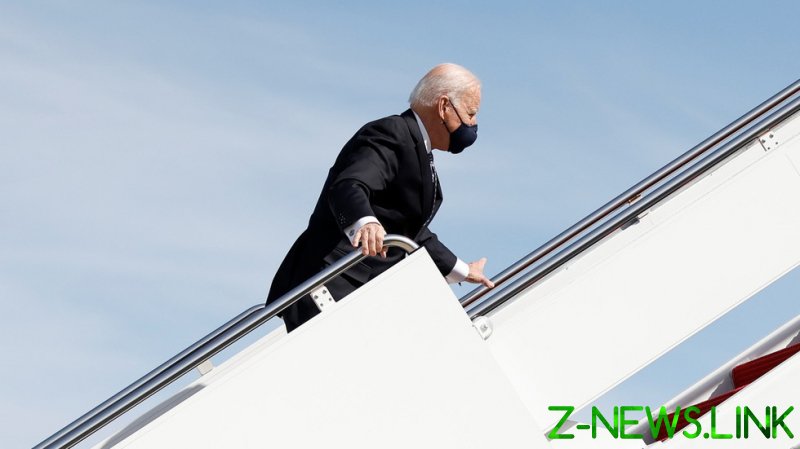 The president fell three times while ascending the stairs on Friday, at one point dropping to his knee while still holding the railing.

White House Communications Director Kate Bedingfield chalked it up to “nothing more than a misstep” and said Biden “is just fine” and did not require attention from the medical team that travels with him.

The moment has provided plenty of reason for Biden critics, who already regularly point to his advanced age (78) and his numerous verbal gaffes in public, to mock the president. Some even drew comparisons to the late Gerald Ford, whose near-headfirst stumble off of Air Force One in 1975 was routinely mocked during his presidency, most famously by comedian Chevy Chase on ‘Saturday Night Live’ – a bit of satire conservatives do not predict Biden will be receiving.

“I have been reliably informed it is simply impossible to do comedy about Biden,” Daily Wire founder Ben Shapiro tweeted in reaction to the video.

“He makes Gerald Ford look like Fred Astaire. I’m sure SNL will have a field day with this…” Breitbart’s John Nolte added.

Making Biden’s misstep look slightly worse is a previous video of him on the campaign trail, bragging about his ability to “run up ramps” compared to then-President Donald Trump “stumbling” down ramps.

Trump appeared to nearly fall down a ramp after giving a commencement speech at West Point Military Academy last year – and was also roundly mocked on Twitter at the time. That incident happened just days after then-Vice President Mike Pence stumbled while climbing the stairs to Air Force Two.

Considering the history of US leaders publicly falling and the lack of an apparent injury for Biden, some have pushed back against the mockery and questioned why the moment is gaining so much attention, with some noting “everyone falls and trips” sometimes.