Home / WORLD / Biden fails to understand that Northern Ireland protocol is ‘not a bargaining chip for US trade deal’, says UK minister

Biden fails to understand that Northern Ireland protocol is ‘not a bargaining chip for US trade deal’, says UK minister 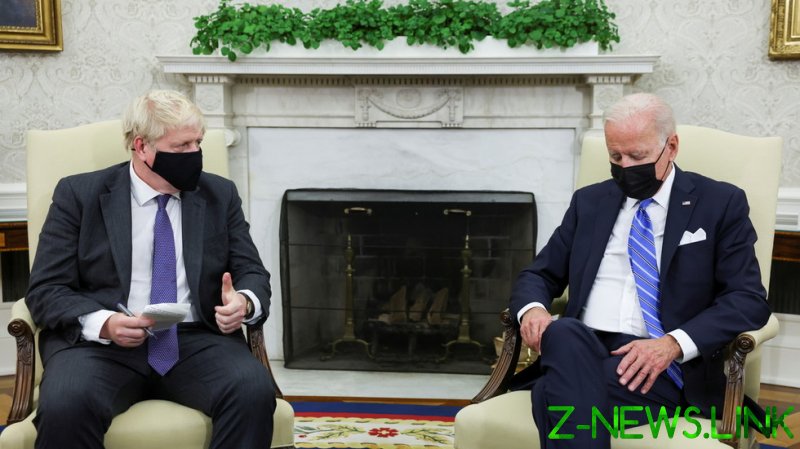 The environment secretary contended that Biden might have been reading too many headlines and listening to the EU and Ireland’s side of the story. As such, his assumption about the Northern Ireland protocol ignored Britain’s demands for a sustainable solution which will maintain peace on the island.

The Northern Ireland protocol is “not a bargaining chip” for a US trade deal, Eustice stated, adding that it was down to countries in Europe to make the post-Brexit pact work, not Washington.

Discussing a long-awaited UK-US trade deal, Eustice said Biden had always been clear that such a pact was not a priority for his government. He stressed that a bilateral trade deal with the US was the end goal, noting that the UK joining the US-Canada-Mexico deal has been floated as a possible alternative.

On Tuesday, British Prime Minister Boris Johnson met with Biden in the White House following events at the UN General Assembly in New York. Johnson appeared to take the White House aides off-guard as he took questions from two reporters in the British press corp. Biden suggests the trade deal and peace in Ireland are separate issues. After Johnson responded, the press were ushered out by White House aides.

The Northern Ireland protocol has been a consistent area of contention since Brexit. Under the current agreement, Northern Ireland is cut off from the rest of the UK with a customs border introduced along the Irish Sea.