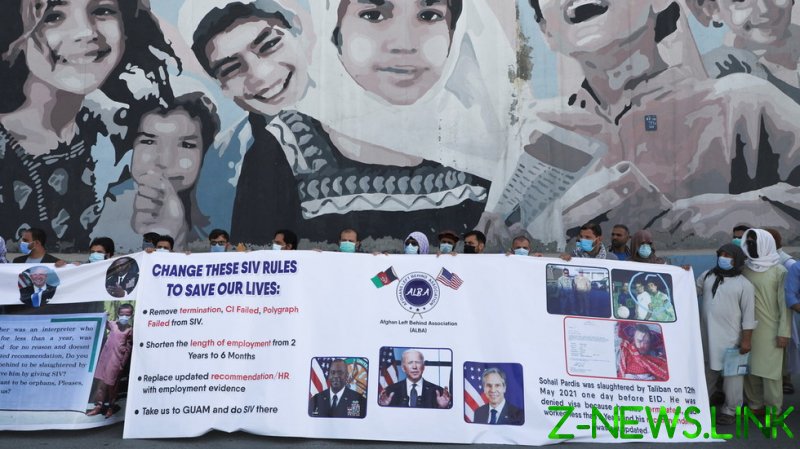 Biden overrode his own June 11 decision to commit an amount “not to exceed $46 million” for the purpose, according to a White House announcement on Friday.

While the wording reflects the statutory requirements of the 1962 law under which the funding is provided, Biden explicitly mentioned “victims of conflict, and other persons at risk as a result of the situation in Afghanistan, including applicants for Special Immigrant Visas,” making it clear the money was intended to help Afghan translators and other local contractors who have worked for US and NATO forces in the country since 2001, and their families.

Another $200 million worth of “services and articles from the inventories of US government agencies” will be directed to meet the same needs, Reuters reported citing the White House.

Friday’s announcement came shortly after multiple corporate media outlets reported the story of Sohail Pardis, a 32-year-old former interpreter for US forces in Afghanistan, who had been beheaded by the Taliban in Khost province.

Pardis was driving from Kabul to Khost on May 12, when he ran into a Taliban checkpoint. He was shot, dragged from his car, beaten and beheaded, media reported citing local villagers who witnessed the event.

Pardis had worked for the US military for 16 months, before he was dismissed in 2012 after failing a routine lie detector test. His application to be evacuated to the US under the Special Immigrant Visa program was denied on those grounds.

Last week, the Biden administration announced ‘Operation Allied Refuge,’ an effort to evacuate thousands of Afghans who had assisted the US forces over the years. The last US combat troops are expected to pull out of Afghanistan by the end of August, leaving the government in Kabul to the tender mercies of the advancing Taliban.