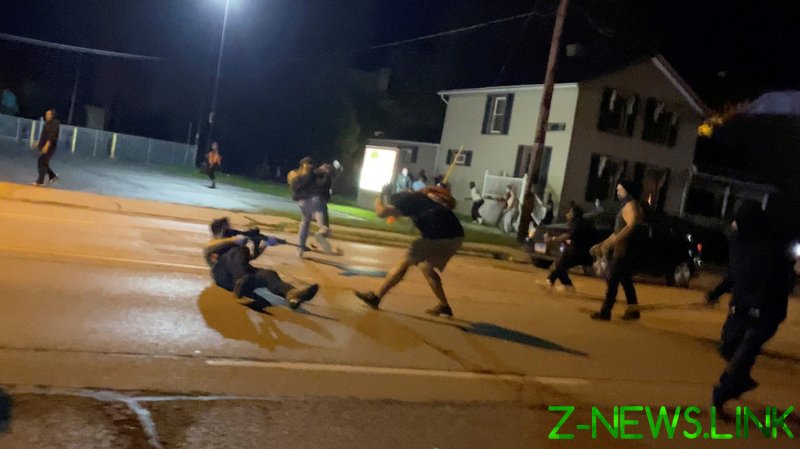 During the Monday evening press conference at the White House, Trump said he was “looking” at what he described as a “an interesting situation,” when asked to condemn Rittenhouse.

“You saw the same tape as I saw and he was trying to get away from them, I guess, looks like. And he fell and then they very violently attacked him and it was something that we’re looking at right now, and it’s under investigation,” the president said.

Liberal journalist Aaron Rupar tweeted a video clip of the remarks, saying Trump “defended” Riittenhouse. Senator Chris Murphy (D-Connecticut) was quick to point out that Rittenhouse was “charged with murder,” apparently oblivious to the difference between being charged and being found guilty in a court of law.

Yamiche Alcindor of PBS made the same insinuation as Rupar, only phrasing it as “Some will no doubt see that as Trump justifying Rittenhouse’s actions.”

Trump’s “refusal to condemn” and defense of supporters who allegedly shot rioters with paintballs in Portland were cited by MSNBC producer Kyle Griffin as argument that Republicans have no right to demand Democrat presidential nominee Joe Biden “make specific statements on violence.”

The president himself took Biden to task for not condemning Antifa, the far-left militants behind the months-long unrest in Portland who actually murdered a Trump supporter over the weekend there. While Republicans tend to make no difference between Black Lives Matter and Antifa, Democrats deny Antifa exists at all.

Resistance activist Joshua Potash, meanwhile, argued there should be no “false equivalence” between “violent right white supremacists with the backing of the President” – presumably Rittenhouse – and “people insisting cops stop murdering Black folks,” presumably meaning either Antifa, the three men Rittenhouse shot, or both.

The trouble with this line of reasoning, however, is that there is not a single shred of evidence whatsoever that Rittenhouse was a “right white supremacist.” That hasn’t stopped prominent Democrats – such as Congresswoman Ayanna Pressley (D-Massachusetts) from making the accusation. She went so far as to describe the three men he shot as people who “assembled to affirm the value, dignity, and worth of Black lives.”

Pressley doesn’t have to worry about getting sued for defamation, members of Congress apparently being above the law in that regard. Others were quick to backtrack on the “white supremacist” talk when they found out Rittenhouse was represented by the same attorney who won big payouts for Covington Catholic student Nick Sandmann.

Sandmann, who was also 17 at the time the mainstream media outlets described him as a racist who attacked peaceful protesters by standing still and smiling in a red MAGA hat in January 2019, won undisclosed payouts from the Washington Post and CNN, thanks in part to the efforts by Lin Wood, his attorney who has now joined Rittenhouse’s defense team.