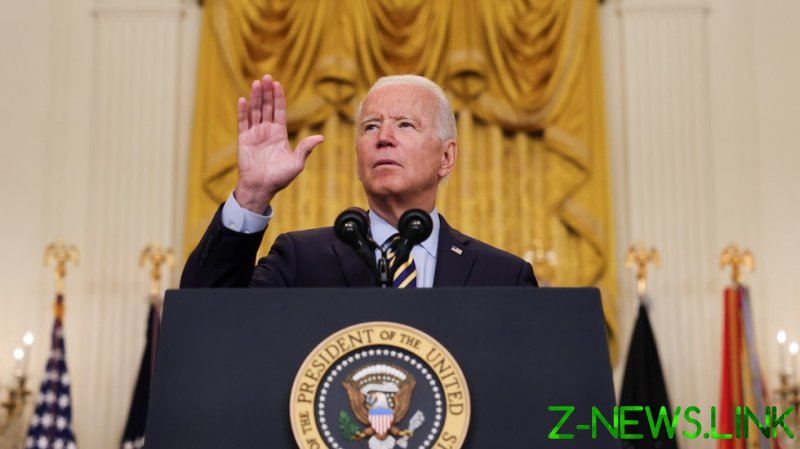 Facing a surprisingly hostile and rambunctious White House press corps on Thursday, Biden argued that US troops shouldn’t stay in Afghanistan because the Taliban are the strongest they’ve been in 20 years – before backtracking to say they are still less capable than the US-backed Afghan security forces.

A Taliban takeover of Kabul is “not inevitable,” Biden argued, pointing out the Afghan army has 300,000 troops and an air force while the Taliban number 75,000 fighters.

“Do I trust the Taliban? No,” he said at one point, visibly agitated. “But I trust the capacity of the Afghan military, which is better trained, better equipped, and more competent at conducting war.”

Biden also pushed back on claims the US intelligence community had concluded the government in Kabul would collapse, saying that was “not true.” The government has the capacity, the forces and the equipment to fight, but must come together and reach a unity of purpose, he explained.

The US will “not walk away,” he added, implying that Washington will continue to fund the Afghan military, as it has done for years.

“No nation has ever unified Afghanistan,” he argued, suggesting that the country might end up partitioned in some fashion between Kabul and the Taliban.

The US president rejected any comparisons to the collapse of South Vietnam in 1975, just three years after the US withdrawal. The Taliban were “not remotely comparable” in capability to the North Vietnamese army, and there won’t be any photos of helicopters leaving the US embassy in panic, he told reporters. Nor would he accept any US responsibility for what happens next, putting it all on the government in Kabul.

As for the Afghan translators or local contractors, who are at risk of reprisals by the Taliban, he said US law doesn’t allow him to bring them over without visas, but they could seek temporary refuge in nearby countries until that process is complete – or US Congress changes the law.

The US has “dramatically accelerated” the timeline for approving special immigrant visas (SIV) for the translators and their families, Biden said, announcing that relocation flights will start later this month for those who choose to leave. Some 2,500 visas have already been issued since his inauguration, he added. According to US media, however, there are anywhere from 9,000 to 50,000 total Afghans, counting family members, that might seek sanctuary in the US under this program.

The US went into Afghanistan in October 2001, accusing the Taliban of harboring Al Qaeda leader Osama Bin Laden, whom Washington blamed for the 9/11 terrorist attacks. Bin Laden was eventually tracked down to a compound in Pakistan and killed in 2011, while Biden was Barack Obama’s vice-president.

Biden instinctively denied any association with the “mission accomplished” slogan – referring to the banner President George W. Bush used to boast of a successful Iraq invasion in 2003, which later turned into a quagmire – but then backtracked to say that “the misison was accomplished in that we got Bin Laden and that terrorism is not emanating from there.”