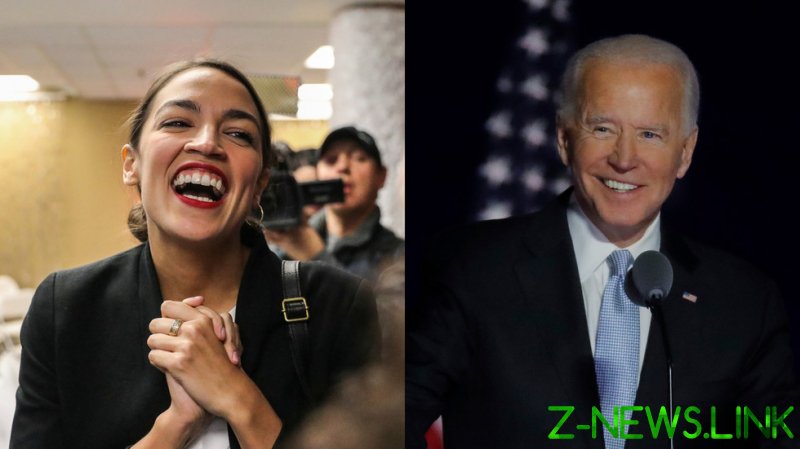 “I think that Vice President Biden campaigned on an incredibly progressive and aggressive agenda,” deputy campaign manager Kate Bedingfield said in an interview Sunday on NBC’s Meet the Press program. She added that “he’s going to make good on those commitments.”

Bedingfield described Biden’s program to combat climate change as a “big, aggressive plan.” “It’s a perfect example of the kind of, you know, big effort that he is going to make to meet this moment and to meet these crises that we’re in,” she said.

The Sunrise Movement, the driving force behind the Green New Deal, campaigned for Biden after Senator Bernie Sanders dropped out of the race for the Democratic nomination. The climate activist group, however, fell short of an official endorsement, giving Biden’s climate plan an “F”.

Biden has vowed on his first day in office, after his Jan. 20 inauguration, to overturn President Donald Trump’s executive order withdrawing the US from the Paris Climate Accord.

Bedingfield’s comments came after Ocasio-Cortez raised concerns in a New York Times interview published Saturday that activist groups tend to support political candidates, only to see the promises made to them go unfulfilled.

Biden, a career politician widely seen as an inherent part of the US political establishment, tried to appeal to the progressive wing of his party during Democrat primaries with such policies as providing health-care coverage to illegal aliens — a progressive talking point.

However, after securing the nomination, he emphasized more centrist viewpoints. For instance, during general-election debates, both Biden and his running mate, Kamala Harris, tried to deny their earlier statements on banning hydraulic-fracturing used in oil and natural-gas extraction.

CNN and other media outlets on Saturday announced that Biden had won the Nov. 3 election, although ballot recounts are expected in some states and Trump has vowed legal challenges over alleged voting fraud. Still, Biden debuted his transition website on Sunday, laying out policy plans on the issues of Covid-19, climate change, racial equity and economic recovery.

Among Biden’s “day-one” initiatives is working to implement a nationwide mask mandate to deter the spread of Covid-19.

On his transition website, Biden states that he will be “working with governors and mayors” to make sure that everyone in the country wears masks in public places. A US president lacks the power to enforce such a mandate single-handedly across the nation.