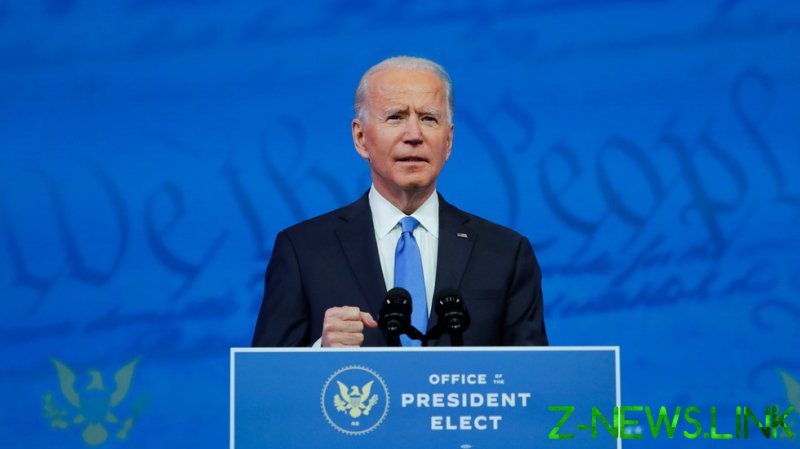 Biden touted his election win in a speech from his hometown of Wilmington, Delaware on Monday, saying he struck a “clear victory” against the incumbent Trump, whose repeated allegations of voter fraud he rejected as “baseness claims.”

“In America, politicians don’t take power – people grant it to them. The flame of democracy was lit in this nation a long time ago. And we now know that nothing – not even a pandemic, or an abuse of power – can extinguish that flame,” he said, adding that Trump had “refused to accept the will of the people.”

Even while taking aim at Trump for an “assault on our democracy,” however, Biden vowed to “be president for all Americans,” calling for “solidarity” and to “lower the temperature” in the country after a bitter presidential race. “Now it’s time to turn the page, as we’ve done throughout our history. To unite. To heal,” he said, repeatedly stopping to clear his throat throughout the speech.

Turning to the coronavirus pandemic, Biden said there was “urgent work” ahead of the new administration to bring the outbreak “under control,” including “getting the nation vaccinated” and delivering “immediate economic help” to those struggling under business closures and other shutdown policies. He previously noted that he would “ask” Americans to wear masks during his first 100 days in office, claiming that between the face coverings and a mass vaccine roll-out, the virus could be stopped in its tracks. Though Biden previously indicated that he would favor a national mask mandate, and possibly compulsory vaccinations, he has since backed away from both positions, instead vowing to implement only a partial mask rule covering federal buildings and interstate travel, among other select settings.

Biden’s brief speech on Monday came hours after the Electoral College voted to certify his victory in the 2020 race, paving a path to inauguration on January 20. The vote followed weeks of legal wrangling over the election result and dozens of suits filed across the country by Trump and Republican allies, none of which handed him any major wins or offered persuasive evidence of significant fraud.