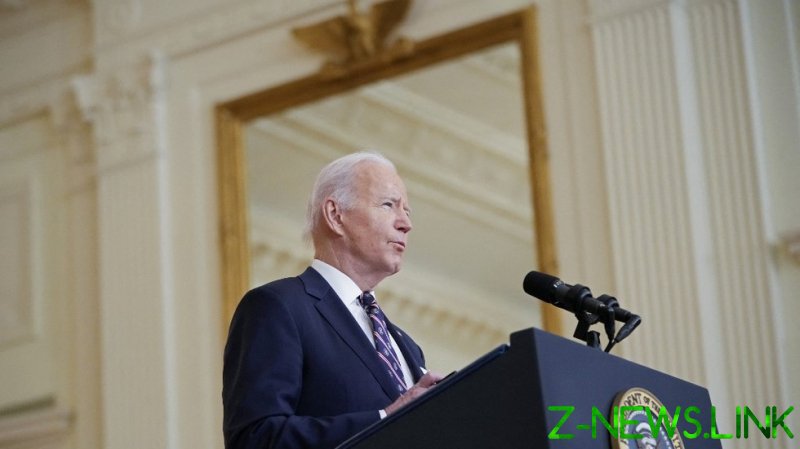 New economic sanctions will be placed on Russia’s biggest financial institutions, as well as “Russia’s elite and family members,” US President Joe Biden announced on Tuesday, in response to Moscow’s recent recognition of the Donetsk and Lugansk People’s Republics. Biden referred to the recognition as “the beginning of an invasion” of Ukraine.

The president said he is also working with Germany to prevent the Nord Stream 2 pipeline from moving forward and is cutting “off Russia’s government from Western financing.”

President Vladimir Putin’s recognition of the breakaway territories is “setting up a rationale to take more territory by force,” Biden added, claiming Russia has been strategically moving troops and military equipment for what could be a large-scale invasion.

“To put it simply, Russia just announced that it is carving out a big part of Ukraine,” Biden declared, saying the US would stand by its NATO allies, while also insisting that the US “has no intention of fighting Russia.”

The new sanctions, he claims, are “totally defensive moves on our part.”

The president also promised that further sanctions would be imposed “if Russia goes further” with what he referred to multiple times as an “invasion.”

“Who in the Lord’s name does Putin think gives him the right to declare new so-called ‘countries’ on territory that belonged to his neighbors?” Biden said of the Donetsk and Lugansk People’s Republics.

Biden acknowledged that his actions could have “costs” both in Russia and the US, insisting he is coordinating with oil producers to mitigate any further energy price increases for Americans, who have already seen gas prices rising steadily since last year. “I’m going to take robust action to make sure the pain of our sanctions is targeted at the Russian economy, not ours,” Biden said.

Putin recognized the Donetsk and Lugansk People’s Republics on Monday, while also accusing Ukraine of “extreme nationalism” and “Russophobia,” arguing it is discriminating against Russian speakers while not acknowledging the region’s history, and amassing troops in the two breakaway territories.

“Let me stress once again that Ukraine is not just a neighboring country for us. It is an integral part of our own history, culture, and spiritual world,” he said, emphasizing that Ukrainians are “people Russians have blood and family ties with,” Putin said. He added that “modern Ukraine was completely created by Russia, or to be more exact, by Bolshevik Communist Russia.”

Putin also said that Ukraine’s ambition to join NATO means an “immediate threat of attack against our country,” accusing it of trying to stir up conflicts with foreign countries and sending saboteurs to target Russian infrastructure.

Ukrainian President Volodymyr Zelensky responded to the recognition of the territories by saying that his country could cut all diplomatic ties with Moscow, and insisted the borders remain the same in spite of Putin’s announcement.