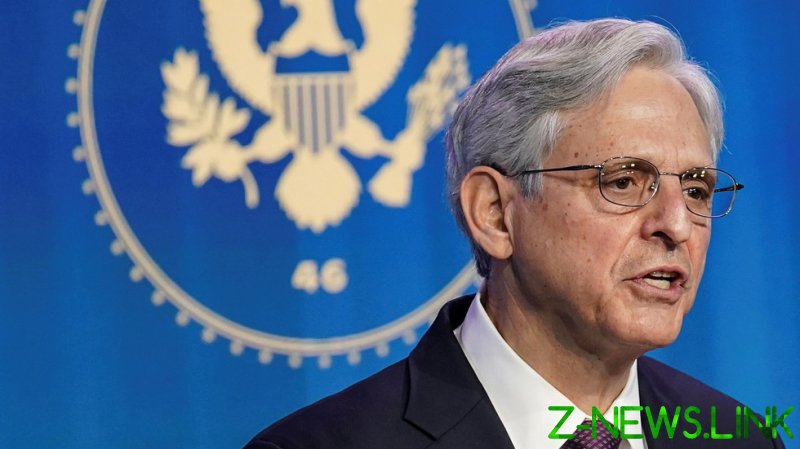 Garland’s hearing kicks off on Monday, and according to the opening statement he plans to deliver to the Senate, Garland will gladly help President Biden crack down on “domestic terrorism” and “white supremacy.”

“From 1995 to 1997, I supervised the prosecution of the perpetrators of the bombing of the Oklahoma City Federal Building, who sought to spark a revolution that would topple the federal government,” the statement reads. “If confirmed, I will supervise the prosecution of white supremacists and others who stormed the Capitol on 6 January – a heinous attack that sought to disrupt a cornerstone of our democracy.”

Garland certainly has plenty of experience prosecuting domestic extremism. After joining the Justice Department as a deputy assistant attorney general in its Criminal Division, he oversaw the prosecution not just of Oklahoma City bombers Timothy McVeigh and Terry Nichols, but also of ‘Unabomber’ Ted Kaczynski and Atlanta Olympics pipe-bomber Eric Rudolph.

His experience prosecuting terrorism will likely please Democrats and pundits who’ve labeled the MAGA movement a scourge on national politics, its adherents “extremists” who need to be “deprogrammed,” and the riot on Capitol Hill a Donald Trump-directed “insurrection,” worse, some have said, than the 9/11 attacks.

However, the comparison between the Capitol riot and the Oklahoma City bombing appears to be a stretch. When Trump’s supporters stormed the Capitol they caused some minor property damage and briefly interrupted the certification of Joe Biden’s electoral win. Of the six people who died in connection with the riot, only one – a Trump supporter shot dead by a Capitol Police officer – has been conclusively proven to have been killed as a direct result of the melee.

McVeigh, by contrast, detonated a truck packed with homemade explosives outside the Alfred P. Murrah Federal Building and killed at least 168 people, among them around 20 children. More than 680 others were injured and 324 nearby buildings damaged in the blast.

Despite the difference in both cases, the mainstream media has rushed out puff pieces describing how Garland’s experience in Oklahoma City makes him the perfect candidate to take the fight to “white supremacists and conspiracy-minded anti-government types,” to quote the Washington Post on Friday.

The post wasn’t the only pro-establishment outlet comparing the two cases. The New York Times quoted one of Garland’s old bosses at the Justice Department as saying “the militias and the right-wing terrorists whom we encountered in the 1990s were a foreshadowing of the groups you saw storming the Capitol,” while the Los Angeles Times described his experience picking through the bombsite in Oklahoma and prosecuting hardened bombers McVeigh and Nicholls “by the book” as something of a practice run for prosecuting the “extremists who stormed the US Capitol.”

A number of militia members, including nine ‘Oath Keepers’, are among the 250-plus participants in the riot charged thus far. While the riot has been frequently described as a “white supremacist” attack, there is scant evidence backing this up. One participant wore a ‘Camp Auschwitz’ hoodie, while another brandished a Confederate flag, and a solitary participant described himself as a white supremacist.

However, the rioters were a more diverse crowd than one would imagine, and included a member of the Latin Kings street gang, a Messianic Rabbi, and a two-time Olympic gold medalist swimmer, according to analysis by NPR.