Biden admits prices ‘too high’ & promises to save Christmas 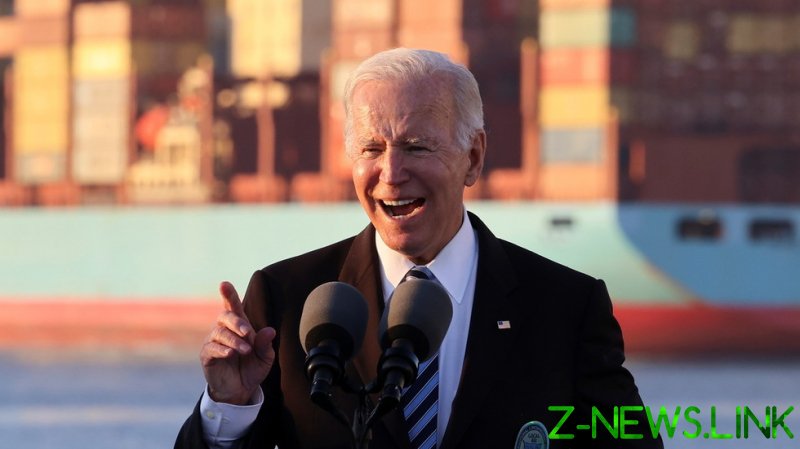 Speaking in the port of Baltimore on Wednesday to promote the infrastructure bill and urge Congress to pass the even bigger and more sweeping BBB. Though he argued the US was experiencing the “highest growth rate in decades, fastest decrease in unemployment ever,” he acknowledged most Americans see only the rising prices.

“Everything from a gallon of gas to a loaf of bread costs more,” he said. “And it’s worrisome, even though wages are going up.”

Earlier in the day, the Department of Labor reported 6.2% inflation since last October, the highest since 1990, noting it has outstripped the growth in wages. Goldman Sachs has warned the inflation will “likely get worse before it gets better.”

Biden said his administration has a plan to get prices down, make sure the shelves are fully stocked, and get Americans back to work, but would not say exactly how. Last week, his Energy Secretary Jennifer Granholm laughed at being asked about a plan to lower gas prices.

“Many people remain unsettled about the economy and we all know why. They see higher prices,” Biden said. When they go to a store or online, “they can’t find what they always want, and when they want it. We’re tracking these issues and trying to figure out how to tackle them head on.”

He argued the $1.2 trillion infrastructure bill would revitalize US passenger and freight rail, roads and bridges, ports and airports and mass transit. It would also create “good, union jobs” worth $45 an hour with good benefits, “that can’t be outsourced,” eliminate the backlog at US ports and end shortages of consumer goods while also battling inflation.

The bill squeaked through the House of Representatives on Friday over the objections of the Democrats’ Progressive Caucus, when 13 Republicans broke ranks to back House Speaker Nancy Pelosi (D-California) and vote for its passage.

Biden said he has spoken to major US retailers, and they assured him the store shelves will not be empty for the Christmas holidays. A White House official told reporters that the Tuesday call involved the CEOs of retailers Walmart and Target, as well as shipping companies UPS and FedEx.

The US comes out of every crisis stronger than before, Biden argued in Baltimore. “We’re sort of down on ourselves in the last 10 years or so,” he said, though he was vice-president to Barack Obama for the first half of that period. “We’ve got to build back better than it was.”