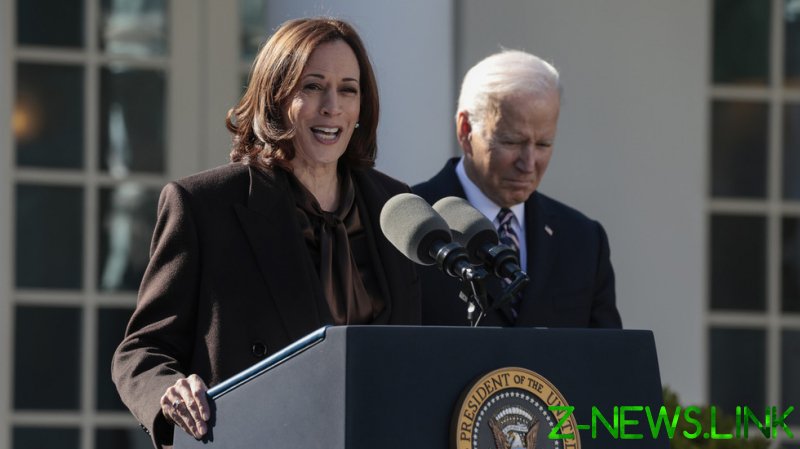 Americans have a lower-than-ever opinion of Vice President Kamala Harris, according to a poll published Friday by Trafalgar Group. Just 28% of respondents approve of the VP, while 57% of those polled said they ‘strongly disapprove’ of how she is handling her job.

US President Joe Biden is languishing at the low end of the approval scale as well, with fully half the population revealing they ‘strongly disapprove’ of his performance.

Poll responses were notable for the intensity of their disdain toward the two politicians. Just 5.4% merely ‘disapprove’ of Biden, while almost 10 times that registered their disapproval ‘strongly’. Similarly, just 5.5% of respondents ‘disapprove’ of Harris – a 10th of the number who strongly disapprove.

Fewer than two in five respondents approve of Biden’s performance, with 20.2% reporting they ‘strongly approve’. Harris’ numbers were even more dismal, with just 28.5% approving, 14.8% of those strongly.

Not even the party faithful could save Harris’ tanking poll numbers – just 51.5% of Democrats approved of her performance, while 23.5% of independents and just 13.5% of Republicans felt the same way.

Like her boss, Harris’ poll numbers have been sliding downward for months now. By November, she had more respondents disapproving of her performance (42%) than approving (37%), numbers which remained largely unchanged as of February.

Despite the usual approval boost presidents receive in times of conflict, the Biden administration’s ratings are plunging in spite of its standoff with Russia over Ukraine. Many Americans have soured on the administration due to soaring inflation and skyrocketing gas prices, despite Biden’s efforts to blame the country’s financial woes on Russian President Vladimir Putin.

Harris, meanwhile, has been accused by critics of having largely failed to deliver on her assigned tasks within the administration – such as bringing the flow of illegal immigrants across the southern border under control. A recent court filing found that 756,109 illegal aliens had been caught and released by the US authorities since the administration took office in January 2021 – a number that doesn’t even include the migrants who managed to sneak into the country without being caught.