Home / WORLD / Biden administration will NOT sanction Saudi Prince over Khashoggi killing, but will use ‘more effective’ tools – White House

Biden administration will NOT sanction Saudi Prince over Khashoggi killing, but will use ‘more effective’ tools – White House 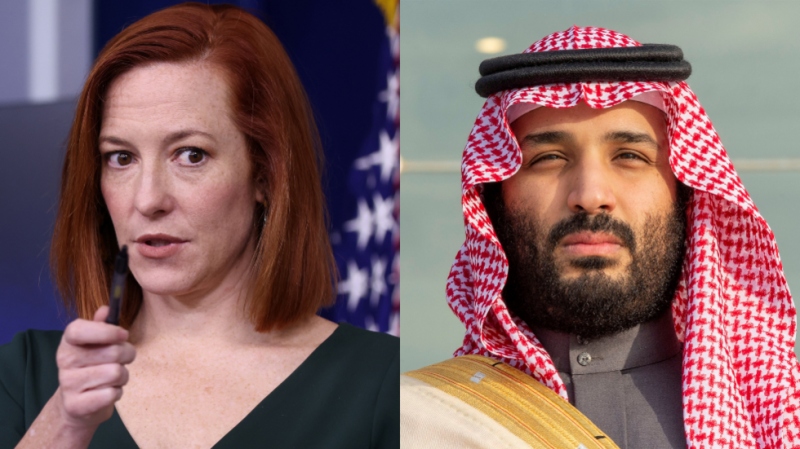 The Biden administration’s decision to sanction a number of Saudi officials, but not the Crown Prince himself, was made after an intelligence community report released on Friday accused the Prince of approving the capture and killing of Jamal Khashoggi in Istanbul in 2018.

Psaki appeared on CNN’s ‘State of the Union’ on Sunday to defend the decision to let the prince off, telling host Dana Bash that the US had “more effective” methods of reprimanding the Saudi royal.

“We believe there is more effective ways to make sure this doesn’t happen again and to also be able to leave room to work with the Saudis,” Psaki said. “That is what diplomacy looks like.”

Despite Psaki’s appeal to precedent, Joe Biden promised tough action against the young prince, known as MBS for short, on the campaign trail. At a debate against then-president Trump in October, Biden vowed that he would make Saudi Arabia a “pariah” over the Khashoggi killing, that the Saudi royals had “very little social redeeming value,” and would “pay a price” for the slaying.

Psaki remained tight-lipped on what methods may be used against MBS, and Biden told reporters that there would be an announcement on Monday “about what we’re going to be doing with Saudi Arabia generally” as he left the White House on Saturday.

Though condemned by human rights advocates for their disproportionate impact on innocent citizens of the countries they target, sanctions are a well-used tool in the US’ diplomatic arsenal, beloved by Democrats and Republicans alike. The Donald Trump administration liberally sanctioned Iran, Venezuela, China, North Korea, Syria, Cuba and Russia, and even prosecutors at the International Criminal Court.

In both her current role and former post at the Obama-era State Department, Psaki has advocated stern sanctions, even for leaders of foreign governments. She warned in 2014 that the US was considering sanctions on Russian President Vladimir Putin, and just days ago told reporters that sanctions on Russia for alleged involvement in the SolarWinds hack and for the jailing of opposition figure Alexey Navalny, would be coming within “weeks, not months.”

In the case of the SolarWinds incident, administration officials again speculated that alternate methods may be used on top of sanctions. The administration’s response, National Security Advisor Jake Sullivan told CBS last week, “will include a mix of tools seen and unseen.”

The Biden and Trump administrations are seemingly alike in their use of sanctions where they see fit, but also in which targets they avoid. Trump condemned the killing of Khashoggi but ignored pressure for both Republicans and Democrats to punish the Saudis for it. Less than a year after Khashoggi was killed, Trump vetoed three bills from Congress that would have prohibited US arms sales to the desert kingdom.

Prince Mohammed has denied responsibility for Khashoggi’s death and dismemberment, blaming it on rogue elements within his security forces. The Saudi Foreign Ministry said in a statement on Friday that the US intelligence report “cannot be accepted in any way.”