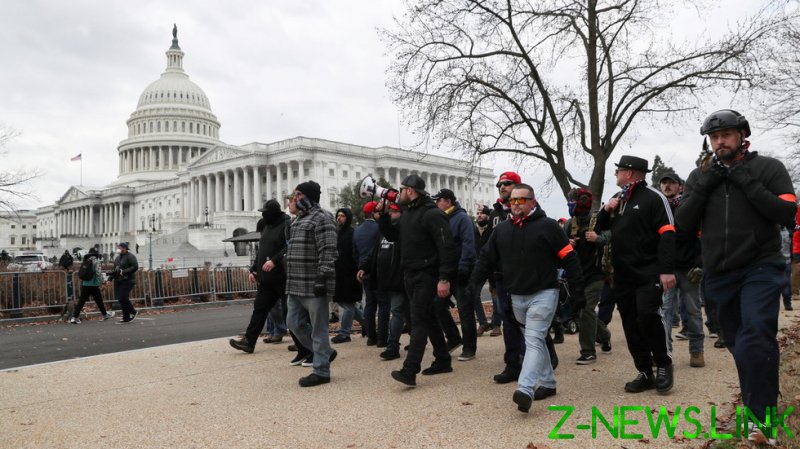 In the aftermath of the pro-Trump riot on Capitol Hill in January, the Biden administration, with the support of sympathetic media outlets and pundits, focused the intelligence-gathering powers of the state inwards.

Biden added members to a domestic extremism team on the National Security Council, the Department of Homeland Security (DHS) declared homegrown “extremists” a “national priority area,” the FBI called for expanded domestic surveillance, and a top Justice Department official last week asked Congress for new powers to prosecute so-called “extremists.” In all cases, the same targets are identified: right-wing dissidents – including militia groups like the Oath Keepers and Proud Boys – who took part in the Capitol riot.

A CNN report on Monday gave a glimpse into what the coming war on domestic dissent could look like. Homeland Security and intelligence agencies, rather than waiting for new powers and heightened funding, are considering outsourcing some surveillance work to research groups and NGOs.

The DHS is limited in how it conducts surveillance, the report explains. It cannot, for example, impersonate right-wingers on forums and chat rooms. However, a panoply of researchers, journalists and nonprofits have been doing this for years. According to DHS officials who spoke to CNN, the agency wants to use research firms to gather the data it’s forbidden from gathering itself. The FBI and National Security Council are reportedly coordinating on the effort, a source added.

It is unclear who these firms could be. However, some of the biggest names in the area include so-called anti-hate groups like the Southern Poverty Law Center and Anti-Defamation League, and ‘fact checking’ firms like Bellingcat. All three of these organizations and others have been accused of pro-liberal, pro-Democrat bias, and have been extensively criticized.

The Atlantic Council, a weapons industry-backed think tank that already helps Facebook fight “misinformation and foreign interference,” is fully on board. Describing the Trump supporters who entered the Capitol in January as “violent extremists,” Atlantic Council fellow Tom Warrick told CNN that he would expect the DHS to “explore whether contractors could help them understand plots and trends” emerging online.

Yet “plots and trends” are vague terms, and establishing them would involve surveilling real people. A source told CNN that the DHS and FBI would likely use the broad data to “identify potential domestic terrorists,” and in CNN’s own words, “focus on specific individuals.”

The federal agencies would be entering a legal gray area. Many of the individuals spied-on would not be guilty of any crime, and their online activity may not meet the level of proof that the FBI would have to show to obtain a surveillance warrant.

Third-party organizations would bypass this bothersome roadblock. Furthermore, these organizations are not constrained by an institutional commitment to impartiality, and could engage in the sort of politically-motivated snooping that the FBI is, at least nominally, forbidden from doing.

Aside from the privacy implications, the definitions of “extremist” or “domestic terrorist” remain vague. While some of the Capitol rioters battled with police officers, many simply walked inside the building and loitered, and have only been charged with trespassing and disrupting a session of Congress. Some members of the Proud Boys and Oath Keepers were charged with “aiding and abetting,” though the indictments against them do not even specify who they aided or how.

Nobody was killed as a direct result of the rioters’ actions, and domestic terrorism is not yet a criminal charge. Nevertheless, federal prosecutors have used the term to bolster their cases against some of the rioters.

The planned collaboration between the federal government and the third-party researchers will almost certainly be fought by conservatives and privacy advocates, but those involved are apparently keen to press ahead regardless of the legal consequences.

“What do you do about ideology that’s leading to violence?” an unnamed intelligence source told CNN. “Do you have to wait until it leads to violence?”