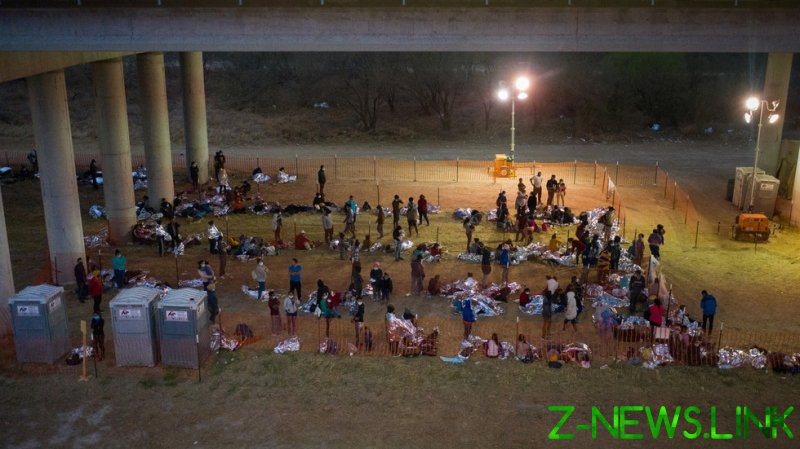 Federal agencies will use the Kay Bailey Hutchison Convention Center for up to 90 days, starting as early as this week, to detain 15- to 17-year-old migrant boys, the Associated Press reported on Monday, citing a memo that was sent to Dallas City Council members.

The site will be used as a “decompression center,” according to the memo. It’s not entirely clear what that term means, but the massive convention center could certainly ease some space pressure at the border. With President Joe Biden adopting a policy of allowing all unaccompanied minor migrants who show up at the border to stay in the US at least temporarily – even amid the Covid-19 pandemic – children are flooding in from Mexico and Central America.

A record high of more than 4,200 migrant kids were being held in border facilities as of Sunday, according to a CBS News report. Many were being detained in the same facilities that Democrat politicians and mainstream media outlets decried as “kids in cages” when Donald Trump was president.

But the number of unaccompanied children crossing America’s southern border has surged about sevenfold since Trump left office, exceeding 300 a day at some points in recent weeks. And most of those being held are being kept in Border Patrol facilities for longer than the three-day limit for transferring children to the Department of Health and Human Services (HHS) to help get them settled in the US. HHS on Sunday directed FEMA to help shelter the flood of illegal aliens.

Fox News reporter Peter Doocy asked White House press secretary Jen Psaki on Monday if the enlistment of FEMA means the Biden administration now considers the situation at the border to be a “disaster.” Psaki declined to use the word “disaster” and later blamed the Trump administration, saying Biden’s team is trying to work through “what was a dismantled and unprepared system.”

Children at Biden’s Border Patrol facilities have reportedly complained of sleeping on the floor, going hungry and being unable to see the sun for days.

The 2 million-square-foot Dallas convention center, which was renamed after a retired Republican senator in 2013, was used to shelter hundreds of people during last month’s crippling winter storms across Texas. It was also used to shelter more than 3,500 evacuees from the Houston area when Hurricane Harvey slammed the Gulf Coast in 2017. The facility was used similarly after other disasters, including Hurricane Katrina in 2005, when Louisianans were evacuated to several Texas cities.