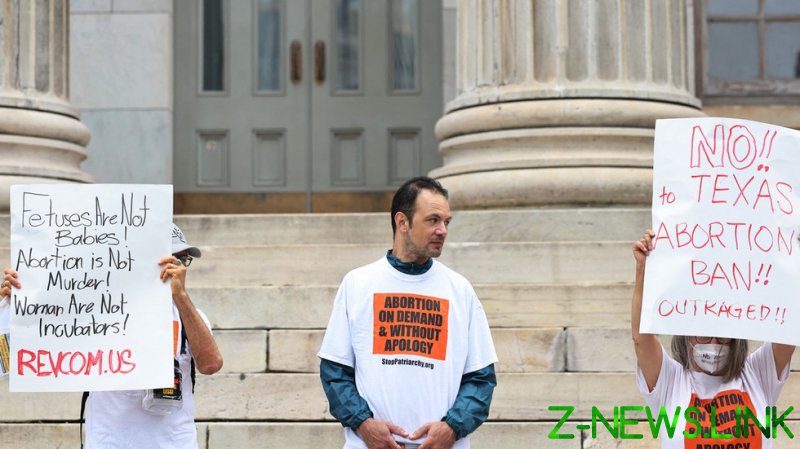 The Texas law known as SB8 went into effect on September 1, and allows citizens to sue anyone who facilitates abortions past the six-week mark to the tune of $10,000 or more.

In Thursday’s filing in the Western District of Texas, the DOJ lawyers argue the law is “in open defiance of the Constitution,” and “prohibits most pre-viability abortions, even in cases of rape, sexual abuse, or incest.”

The federal government is asking the court to overrule SB8 and impose a preliminary and permanent injunction against anyone in Texas from enforcing it, along with “any and all other relief necessary to fully effectuate the injunction against SB8’s enforcement.”

The US Supreme Court has previously refused to put the law on hold, in a 5-4 ruling earlier this month.

“It takes little imagination to discern Texas’s goal—to make it too risky for an abortion clinic to operate in the State, thereby preventing women throughout Texas from exercising their constitutional rights, while simultaneously thwarting judicial review,” the DOJ said in their filing.

The law has already “had its desired effect,” the DOJ said, as abortion clinics in the state have stopped performing procedures prohibited in the bill, “leaving women in Texas unacceptably and unconstitutionally deprived of abortion services.”

The law violates the Supremacy Clause of the US Constitution and the Fourteenth Amendment, “is preempted by federal law, and violates the doctrine of intergovernmental immunity,” the DOJ argued.

Last month, the Biden administration got an injunction in the same federal district against an executive order by Texas Governor Greg Abbott that empowered state police to crack down on vehicles transporting illegal immigrants.

Judge Kathleen Cardone’s order quoted verbatim the DOJ motion for relief, declaring that Texas was violating the Supremacy Clause by trying to stop federal agents and NGOs contracted by the Biden administration from busing immigrants that crossed over from Mexico illegally into the interior of the US.