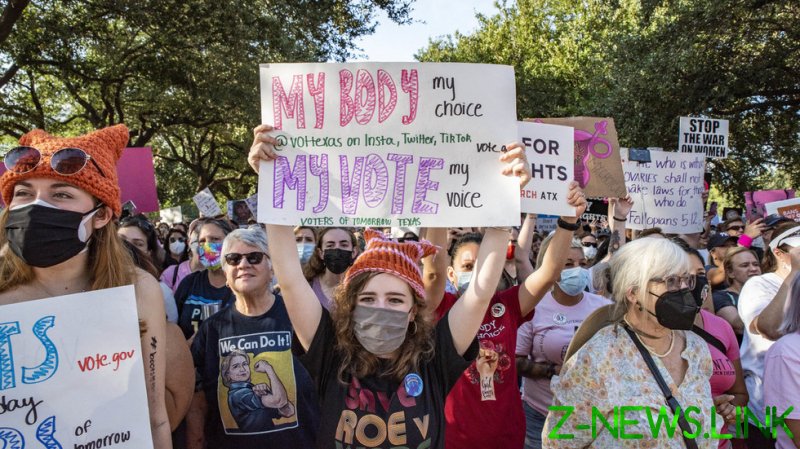 The Justice Department is seeking to block the law from coming into effect while the fight over its constitutionality continues in the courts. It has been statutory since September, excepting a 48-hour period ordered by a district court.

The Biden administration filed on Monday to reverse a ruling by the Fifth Circuit Court of Appeals on Thursday night that had permitted its implementation.

“The question now is whether Texas’ nullification of this Court’s precedents should be allowed to continue while the courts consider the United States’ suit. As the district court recognized, it should not,” the Justice Department wrote in its challenge to the controversial new law, referring to previous SCOTUS decisions upholding women’s right to abortion.

“For half a century, this Court has held that ‘a State may not prohibit any woman from making the ultimate decision to terminate her pregnancy before viability’,” the filing argues, noting that the Texas bill “defies those precedents by banning abortion long before viability.”

The Justice Department had announced on Friday that it would petition the Supreme Court to prevent the law from taking effect, after previous efforts to delay its implementation had failed.

The law prohibits any abortion conducted after six weeks of pregnancy – a controversial timeline, given that many women are not aware they are pregnant until later.

The Texas law is the strictest anti-abortion measure to take effect in the US since the 1973 Supreme Court decision Roe v. Wade effectively legalized the procedure. Unlike most other state-level curbs on abortion, it doesn’t allow for exceptions in the case of rape or incest. Texas will even reward any individual who snitches on a woman opting for an abortion, paying out up to $10,000 to finger drivers, doctors, and others who aid and abet those seeking to have the newly illegal procedure.