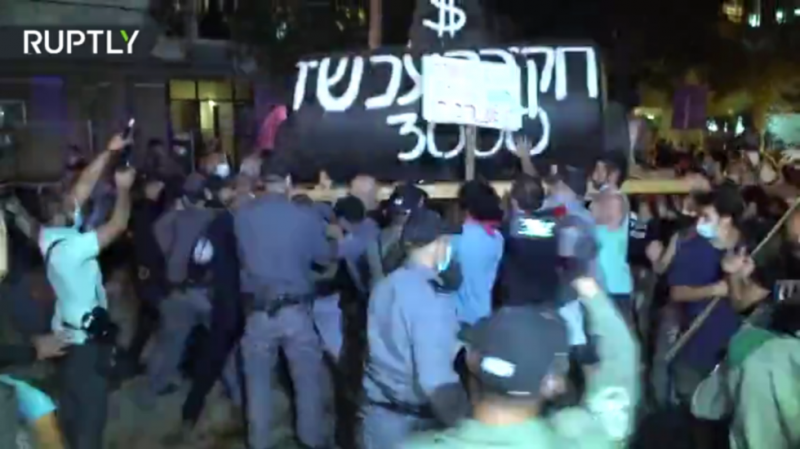 Clashes broke out when police tried to contain thousands of protesters who poured into Habima Square in central Tel Aviv to demand that the PM step down.

Officers were filmed dragging people along the ground and struggling to push the crowd away from the square.

Four people were detained. Police told the media that some officers were injured as protesters threw “objects” at them.

Smaller demonstrations occurred in various locations across the country as protesters abided by the emergency rule barring Israelis from rallying more than 1km (0.6 miles) away from their homes. The measure was imposed last month as part of the government’s strategy to combat the resurgence of Covid-19 infections and was extended for an additional week on Wednesday.

Israel went into its second lockdown in September, shutting down many non-essential businesses, banning large gatherings and restricting movement. Netanyahu argued that the tough measures were “unavoidable” and necessary to protect public health amid the spike in Covid-19 cases. The PM’s critics, meanwhile, accused him of exploiting the crisis in order to clamp down on the weekly protests demanding his resignation over mishandling the outbreak and corruption charges.

The ‘Black Flag’ movement has been staging rallies outside the PM’s official residence in Jerusalem and in other cities. The organizers have claimed that, overall, more than 200,000 Israelis protested throughout the country on Saturday. According to local media, if the estimate is accurate, this would make the demonstrations collectively the largest since regular protests intensified over the summer.