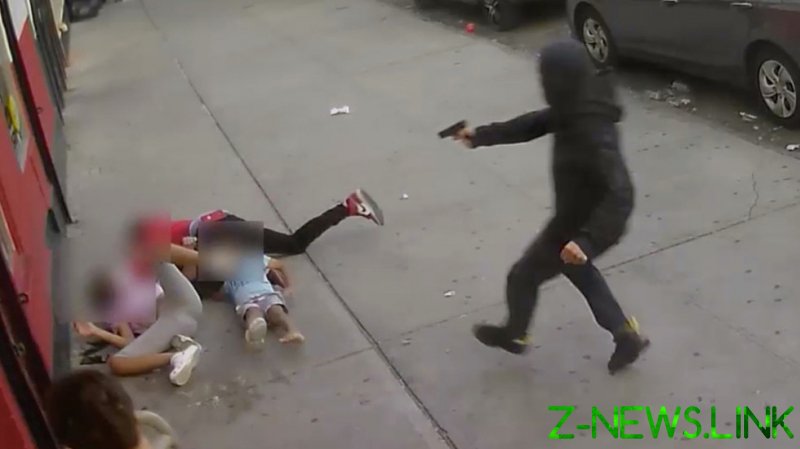 On Friday, the New York Police Department posted a 20-second video of the incident, seeking help in identifying the shooter, as well as another man believed to be his accomplice, who drove a scooter.

The graphic video shows the shooter, dressed in all black and wearing a balaclava, emerging from behind a bus and firing multiple times from up close at another man wearing jeans and a red hoodie. Attempting to escape, the targeted man knocks over a young woman and a little girl, whom the gunman somehow proceeds to miss.

Another video, this time 25 seconds long, was released by NYPD CrimeStoppers, also seeking the public’s help in tracking down the suspects. Timestamps on the video show that the shooting happened at 6:45pm on Thursday.

The “subject shot a 24-year-old male victim multiple times about his body and fled on a scooter operated by the other wanted subject,” the police said.

“A brazen daytime shooting where children are present will not be tolerated,” said James Essig, chief of the NYPD detectives, sharing the CrimeStoppers footage.

The original NYPD tweet received hundreds of responses from frustrated New Yorkers. More than one asked how the strict gun laws and “defunding the police” policies – championed by Democrats running the city and the state – were working out.

“Why should people help you if all the judges are going to do is turn them loose again?” one person asked, referring to the criminal justice and bail reforms that have seen offenders – even violent ones – back on the streets even after dozens of arrests.

“I am rarely shook but this is beyond horrific. This looks like a scene out of a Central American crime movie. Those poor children it’s hard to tell what exactly was going on because it happened so quickly and it’s a good chance the victim was their parent,” one woman wrote.

According to the New York Post, however, the young woman and the child were innocent bystanders, knocked over by the man in red as he tried to flee his would-be assassin. Citing police sources, the outlet reported that the victim was struck three times – once in the back and once in each leg – but was expected to survive.

He was reportedly taken to an area hospital not in an ambulance, but in a car with temporary New Jersey plates that was later found abandoned.