‘Best in the world’: Chelsea keeper Mendy in phenomenal display as Blues beat Brentford to return to top of Premier League (VIDEO) 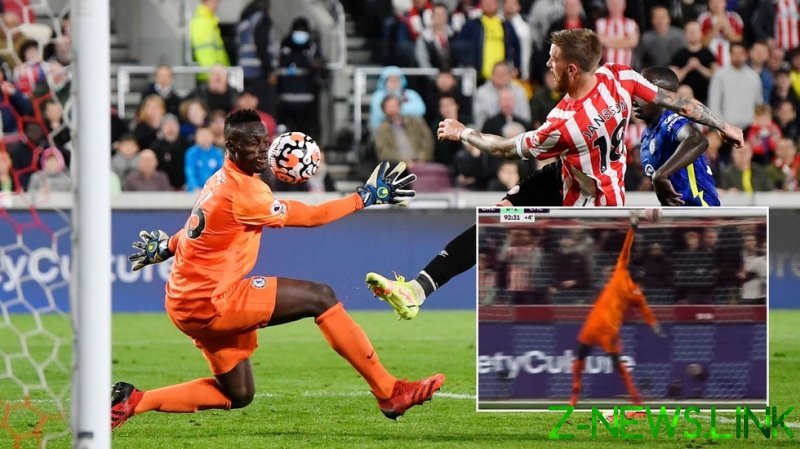 Visitors Chelsea took the lead on the stroke of half-time through a superb volleyed strike from just inside the box by left-back Ben Chilwell.

But approaching the final stages Thomas Tuchel’s men were forced to soak up significant pressure as the newly-promoted hosts pushed for an equalizer.

Chelsea were indebted to Mendy on several occasions, with the Blues keeper blocking one effort from Pontus Jansson with his face inside the final minutes.

Mendy wasn’t done there, pulling out an even better stop in injury time to tip an overhead kick from Christian Norgaard onto the crossbar.

The 29-year-old’s heroics handed Chelsea the win as they returned to the top of the table on 19 points, one point ahead of Liverpool – who routed Watford 5-0 earlier in the day.

Manchester City, who eased past Burnley 2-0 in their game, are one point further behind.

Online, the reaction to the Blues’ win was mostly about the brilliance of the man between the sticks.

Mendy has been a revelation for Chelsea since arriving from Rennes in September of 2020 for a reported £22 million.

He has been seen as solving their goalkeeping issues after the woes endured by Kepa Arrizabalaga, who had arrived from Spain in 2018 for a world-record fee for the position but struggled to live up to the price tag.

Mendy has helped turn Chelsea into one of the meanest defences on the continent, and was integral to their sensational Champions League win last season.

While the Blues will gladly take the three points from a ground where big name rivals Liverpool struggled earlier this season, of some concern could be the continued goal drought in a Chelsea shirt for big-money summer signing Romelu Lukaku.

The Belgian had a first-half effort ruled out for offside, but ultimately went a sixth game in a row for the club without scoring as he was replaced by Kai Havertz in the 77th minute.

Next up for Chelsea is a Champions League clash with Malmo at Stamford Bridge on Wednesday, which on paper would seem an ideal opportunity for Lukaku to end his struggles.

Beyond that is the visit of Premier League basement boys Norwich City to west London next Saturday, in another game Chelsea will be widely fancied to win comfortably.