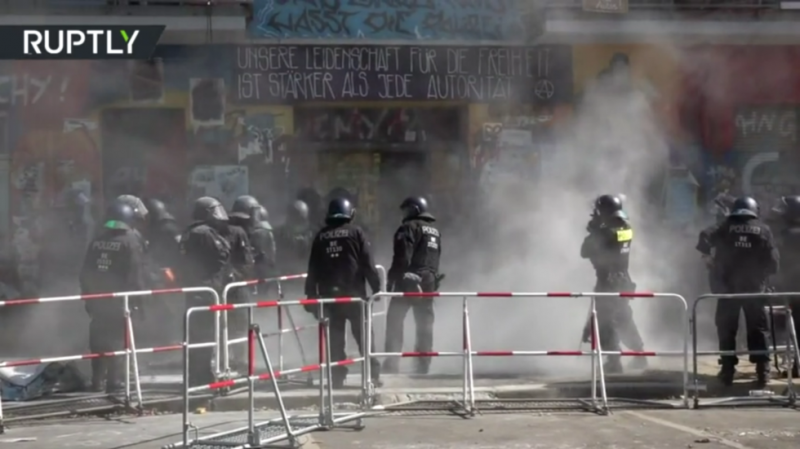 Armed with power tools, a large group of riot cops assembled outside ‘Rigaer 94’ on Thursday morning, while activists perched on a balcony tried to interfere. The officers used large boards and shields to protect themselves as they broke down the front door. A nearby intersection was cordoned off as part of the operation.

Footage from RT’s video agency Ruptly shows plumes of smoke coming from the building’s entrance as the police carry out their forced entry. Activists are seen in the building’s windows holding flares and blasting music. They reportedly also shot off fireworks and threw paint.

Once police got inside the building, they were attacked with fire extinguishers, local media said.

The confrontation emerged after authorities insisted that the building, which has housed squatters for years, be inspected by fire marshalls. While the activists agreed, they told officials that they would not allow police to accompany the inspectors. However, the fire marshalls said that they wouldn’t enter the building without police protection. The squatters assert that the fire inspection is being used as a pretext to kick them out of the premises.

The activists said on Twitter that the inspectors had been allowed into the building with a police escort without any conflicts ensuing. They also claimed that cops were stationed on the staircase and asking to check the IDs of residents.

Rigaer 94’s dwellers have been involved in a long-standing dispute with the building’s owner, who has tried to get city officials to forcibly vacate the location. The house and other squats have been the site of frequent clashes between police and far-left activists.

The forced entry comes a day after the building’s occupants set fire to barricades and threw projectiles at police. Around 60 officers were reportedly injured.