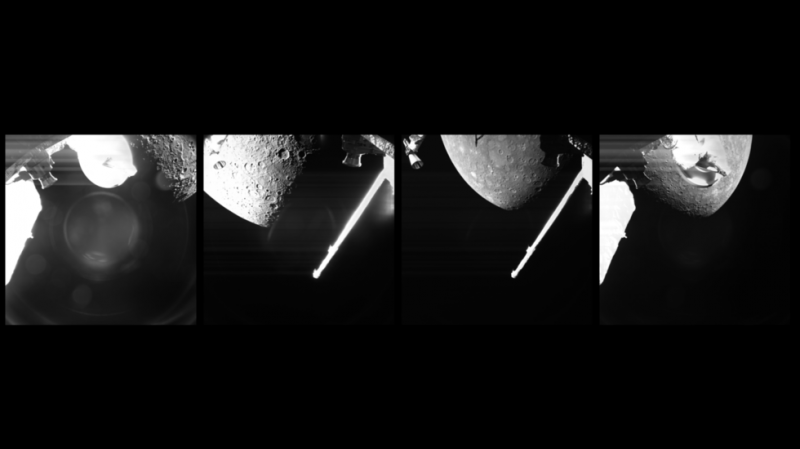 The BepiColombo spacecraft, a joint project of the European Space Agency (ESA) and the Japan Aerospace Exploration Agency (JAXA), flew by Mercury overnight, its closest approach being just 199km (123 miles) above the surface of the hard-to-reach planet. It snapped a handful of photos showing the densely cratered surface of the planet, which resembles the landscape of the Moon.

“The flyby was flawless from the spacecraft point of view, and it’s incredible to finally see our target planet,” the operations manager for the mission, Elsa Montagnon, has said.

The pictures snapped by the probe also show parts of its own structure, including a thruster and a boom. The craft is effectively two separate probes – the Mercury Planetary Orbiter and Mercury Magnetospheric Orbiter – that are joined together for the transfer.

The ESA also released an annotated picture of Mercury’s surface, highlighting the features photographed. The region shown is part of the planet’s northern hemisphere and includes Sihtu Planitia, which has been flooded by lavas. “A round area smoother and brighter than its surroundings characterizes the plains around the Calvino crater, which are called the Rudaki Plains,” the ESA’s description reads.

“It was very exciting to see BepiColombo’s first images of Mercury, and to work out what we were seeing,” the head of ESA’s Mercury Surface and Composition Working Group, David Rothery, of the UK’s Open University, has said. “It has made me even more enthusiastic to study the top-quality science data that we should get when we are in orbit around Mercury, because this is a planet that we really do not yet fully understand.”

The BepiColombo is scheduled to reach Mercury’s orbit in 2025, following a series of orbital maneuvers and repeated flybys. It has already twice flown by Venus, most recently in August. During a flyby, no thrusters are operated and gravity comes into play instead. The spacecraft is named after the Italian scientist Giuseppe ‘Bepi’ Colombo, who first proposed the gravity assist maneuver back in 1974 – a technique now used frequently by planetary probes.