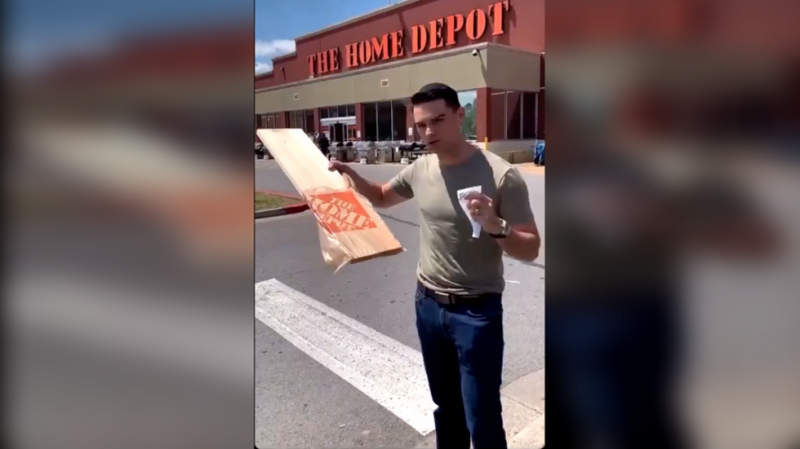 “As you can see, I just went shopping at Home Depot,” Shapiro says in the clip while he holds a plank of wood and a receipt outside a Home Depot location. “You should do the same. This wood, this board, this magnificent piece of poplar is now mine.”

Shapiro’s video and purchase were meant as a symbolic stance against calls for a boycott of the company after they released a statement taking an apolitical stance on Georgia’s new voting legislation, which other organizations like Coca-Cola and Major League Baseball (MLB) have stood firmly against.

Home Depot’s statement on the law, which Republicans argue helps secure elections and Democrats equate to voter suppression, simply said the company, which started in Atlanta, Georgia, would “continue to underscore our statement that all elections should be accessible, fair and secure and support broad voter participation, and to continue to work to ensure our associates in Georgia and across the country have the information and resources to vote.”

The middle-of-the-road reaction has not been enough for many activists in Georgia, who have called on the company to speak out firmly against the legislation.

A coalition of black faith leaders in Georgia representing more than 1,000 churches added to calls for a boycott of Home Depot this week.

Shapiro previously tweeted criticism of the boycott calls, saying he would “only shop at Home Depot from now on” in response.

Shapiro’s video of his actual shopping, however, has mainly earned him a wave of mockery as critics accuse the podcaster and author of making a useless purchase and revealing he may not know too much about anything to do with carpentry.

“In my frequent trips to Home Depot to purchase lumber I frequently put this … small single board in a dainty bag to carry with me,” journalist Josh Marshall added.

In a separate clip from his Home Depot trip, Shapiro said he felt the company did the right thing “staying out of” Georgia’s voter law controversy and pushing back against the “woke left.”