Home / WORLD / Ben Shapiro branded a ‘SNOB’ for not being impressed with Jill Biden’s doctorate, as Twitter mocks his ‘tantrum’

Ben Shapiro branded a ‘SNOB’ for not being impressed with Jill Biden’s doctorate, as Twitter mocks his ‘tantrum’ 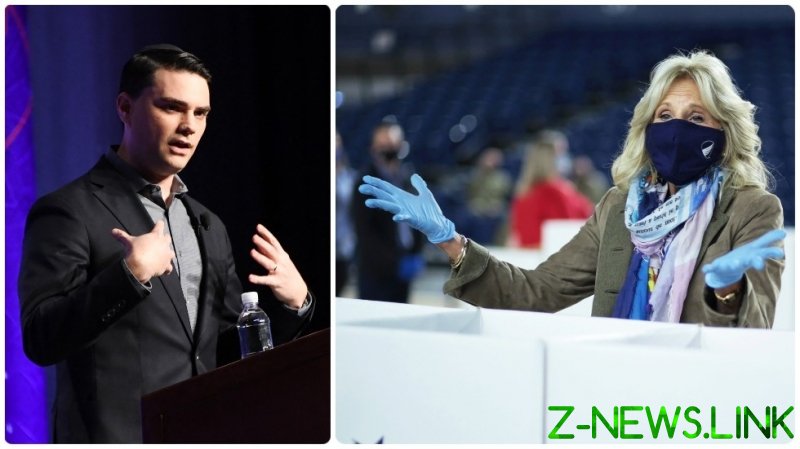 The conservative commentator addressed the surprise controversy over the future first lady’s degree in the latest episode of his show, and critics were quick to pounce on him.

Some accused Shapiro of throwing a tantrum, quoting part of his monologue where he seemingly boasted about his own degree: “If you’re not impressed by Harvard Law, then you certainly should not be impressed by a degree from University of Delaware in education…,” he said, reminding people that he went to “an actual prestigious law school.”

Other commenters came in droves, denouncing Shapiro as a “snob” and an “elitist pr*ck” or attacking other alumni of the university where he got his degree.

Ironically, this particular attack was sort of an own goal. The very same clip shows Shapiro saying that he is not impressed by the degree he holds, and that “you should not be impressed either.” In his show, he said that anyone who insists on being addressed as “doctor,” but who is not an actual MD, is “an ass.”

The episode of Shapiro’s show was about a sarcastic opinion piece by Joseph Epstein, which suggested that Jill Biden should drop her honorific because it “feels fraudulent, even comic.” Joe Biden’s wife holds a doctoral degree from the University of Delaware and prefers to be addressed as “Dr. Jill Biden,” as evidenced by her handle on Twitter.

The honorific was responsible for an amusing case of confused proficiencies in March, when the hosts of ‘The View’ discussed whether Dr. Jill Biden could become a surgeon general in an administration of her husband. “She is a hell of a doctor,” Whoopi Goldberg said in support of the candidacy, before others explained what kind of doctor she was.

Epstein’s take sparked fury from the Left, who accused him of misogyny and other cardinal sins, while many people in the conservative camp, like Shapiro, went on to mock their reactions.

The honorific controversy seems to be as political as anything in the US these days. Just a few years ago, the sides were reversed when another person’s predilection for being called a doctor came into the media spotlight.

Sebastian Gorka, then a freshly appointed Trump adviser and a regular commentator on conservative media, was relentlessly mocked by the Left for – among other things – loving his ‘Dr.’ and ‘DrG’ honorifics. He studied political sciences at what is now called the Corvinus University of Budapest.